(Clearwisdom.net) On November 5, 2007, practitioners from Kuala Lumpur, Malaysia, assembled in front of the Chinese Consulate in Malaysia to protest Beijing's recent illegal arrests of Falun Gong practitioners Zhang Guodong and Tong Huanxiang from Weihai City, Shandong Province, and Long Guande and Zhan Xuemei (husband and wife) from Zhuhai City, Guangdong Province. Practitioners in Malaysia called upon people around the world to be aware of these practitioners' plight and help rescue them. 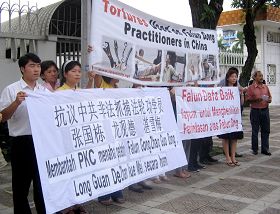 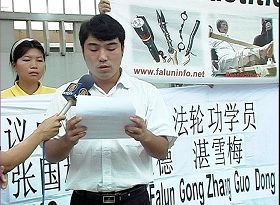 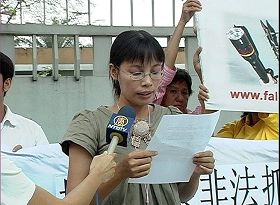 Chen Jin hopes people from all walks of life will help rescue Long Guande and Zhan Xuemei, and all practitioners who are still being tortured by the CCP 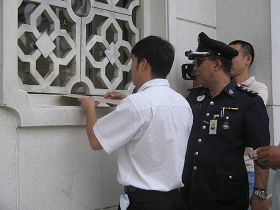 Zhang Zijian, the son of Zhang Guodong and a Falun Gong practitioner in Malaysia, read the letter of protest in front of the Chinese Consulate: "I call on people in China to stand up and help us rescue our friends, Falun Gong practitioners persecuted by the Chinese Communist Party (CCP). We strongly demand that the CCP immediately and unconditionally release Zhang Guodong and other practitioners. I also call on people around the world to pay attention to the arrested practitioners and the worsening human rights situation in China."

Mr. Zhang Guodong, 51, has practiced Falun Gong since 1998. He works hard to improve himself and always puts others first. He follows Falun Gong's principles of Truthfulness-Compassion- Forbearance in his daily activities and has won the respect of local residents. Since the persecution started on July 20, 1999, Mr. Zhang and other practitioners have remained steadfast in their beliefs and continued to tell the government and the people the facts about Falun Gong. They hope to end the persecution soon.

Chen Jin from Guangdong Province is a friend of Long Guande and Zhan Xuemei. Chen called on people from all walks of life to help rescue the practitioners, especially Long and Zhan, who Long and Zhan were arrested and detained several weeks ago. Zhan is locked in the Third Detention Center in Baiyun District, Guangzhou City. Long's whereabouts are currently unknown.

According to Chen, before the persecution, Mr. Long was a well-known construction contractor in Guangdong Province and had more than 10 million yuan in property under his name. After the persecution, Long, Zhan, and their two young children were wanted by the CCP and had no place to stay. Their multi-million yuan in property mysteriously disappeared. Chen said that Mr. Long used to be bedridden before he practiced Falun Gong, and that he and his family had benefited tremendously from the practice.

Chen recently said, "I am a Falun Gong practitioner who was tortured by the CCP in China. Being a witness of this unprecedented cruel persecution, I stand in front of the Malaysia Chinese Consulate and strongly protest the CCP's arrest of my fellow practitioners, Long Guande and Zhan Xuemei! I strongly protest the CCP using brutal measures to persecute tens of thousands of practitioners in prisons, forced labor camps, and brainwashing centers! At the same time, I call on people of justice from all walks of life to lend us your help to rescue Mr. Long and Ms. Zhan and all practitioners who are still being tortured in prisons and forced labor camps in China. Let's hold up the human rights torch and stop the CCP's violent persecution."