On October 6, 2007, Falun Gong practitioners in Honolulu, Hawaii were invited by parade organizers to participate in the parade commemorating Gandhi's birthday anniversary. The theme for this year's parade is "March for World Peace." 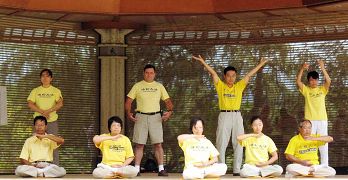 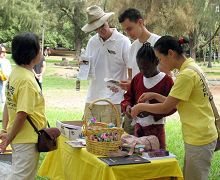 The parade started from Magic Island, then passed by the Waikiki business area and ended at Kapiolani Park. It lasted for about one hour. After the parade, the practitioners participated in the commemoration activities by demonstrating the Falun Gong exercises.

After the parade, many local people came to the practitioners' booth to learn the facts about Falun Gong. A photographer from India, also a primary organizer for this event, interviewed the practitioners and told them of plans to upload the footage to their website for people to view.

A westerner holding truth-clarifying literature told a practitioner that he knew well about the persecution of Falun Gong in China but was shocked upon hearing of the Chinese Communist Party's live organ harvesting. He said, "The persecution is so horrible."

The exercise demonstration attracted many local people, and some learned the movements by following along with practitioners. A pastor asked the practitioners to teach the practice in his church.