(Clearwisdom.net) The New Tang Dynasty TV's (NTDTV) Chinese New Year Spectacular reached its fifth stop, and the eleventh show completed at 10:00 p.m. on January 14, 2007 at ThÃ©Ã¢tre Maisonneuve, Place des Arts in Montreal, Canada. The splendid performance left a deep impression on the audience. The audience in the packed theater were treated to a grand show of traditional Chinese culture. 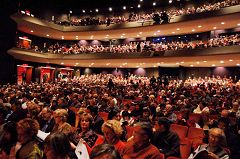 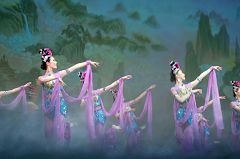 Celestial maidens and their ethereal beauty 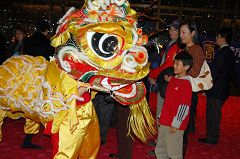 The audience responded enthusiastically to the first performance presented on the evening of January 13. According to the theater's box office staff, from 7:00 a.m. next morning until 4:00 p.m. in the afternoon, people had continuously called in to book tickets to the sold-out subsequent shows.

Many audience members highly commended the beautiful costumes and the performers' radiance. Through touching stories, the dance performances expressed the moral concepts of traditional Chinese culture. The singing performances were warmly received by the audience as well, who expressed an appreciation for the hauntingly beautiful songs.

Ms. Lin and her husband, who came to Canada from Taiwan to see their three daughters, attended the performance. Ms. Lin, who worked in the media industry in Taiwan, said, "The show expresses some very ancient things, and those things are the best part. In the contemporary era, we should treasure these things even more, because they may have been forgotten by many people. I believe tonight's show will rekindle many people's memories and bring back these ancient and most precious things to our lives."

Ms. Lin also said that the show expressed the best things in traditional Chinese culture in the form of art, and it reinforced the impression of them in our minds. She mentioned that relative to mainland China, Taiwan's traditional culture and people's traditional thinking have been preserved quite well, because over the years the Chinese Communist Party has gradually destroyed China's traditional culture. One Chinese audience member said after watching the performance that he could not find such a wonderful performance in the mainland.

A Chinese man surnamed Zhang, who fled to South Asia from the mainland years ago and then moved to Canada, said that the performances were top notch. As a professional violinist, he had high standards and the show was superb. 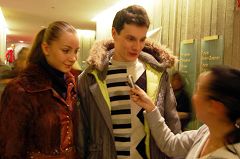 Russian student and his girlfriend enjoyed the show

Konstantin, who is from Moscow, is a student at Concordia University in Montreal. He came to watch the third show with his girlfriend Alicia. After watching the show, Konstantin said, "I enjoyed tonight's performance very much." He said that the program that left the deepest impression on him was about a lady (Falun Gong practitioner) who was beaten to death by the CCP police and then accepted into the heavens. The police who did the bad deeds were destroyed by the gods. He said, "Seeing bad people receive due punishment and that lady ascending to the heavens, I was very pleased. The performance was quite touching."

Konstantin also praised Chinese tenor Guan Guimin's singing. He said, "I grew up in a well-known music family, and that singer has such remarkable artistic talent." He said that he would come for the performance next year.

One Chinese lady said after watching the final show that another Chinese man sitting beside her had been watching the performance quietly, and he did not applaud at all until the celebrated Chinese tenor Guan Guimin sang, "So vast loomed this world, I knew not what I was. Oh, how many lifetimes? The number was a blur..." ("Finding Myself") This man started wiping away tears, and from then on, he applauded every program. After the show, a Chinese man took the initiative to tell the reporter that he liked the dance performance "To the Rightful Place" and soprano Jiang Min's songs. He said that he liked the singing and dancing related to Falun Gong, and he was very concerned about the situation in China. He said that though he does not practice Falun Gong, he wished the best for the practitioners.

Ms. Lin also complimented the dance "Ladies of the Manchu Court" and especially the finale of the program, "Resounding Drums". "When you left the theater, you would feel reluctant to leave and still feel a kind of strength. In the singing programs, though there were songs carrying religious meaning, related to Falun Gong, the singing was terrific, and the singer's demeanor was so solemn. You could feel that Falun Gong practitioners are well-cultivated people, and are experts in this art."

A Chinese colleague of the reporter watched the show and kept talking about it in the following two days. He felt a strong but indescribable feeling and said that the two-hour performance was too short.

One Western artist told the reporter the next day that while watching the performance, he only appreciated it from the perspective of art. But after returning home, the next day, he was moved to tears while thinking about the show.

Traditional Chinese culture is something that everyone can appreciate. A man went over to the reporter at the hall after watching the performance, and started speaking excitedly in French. When he saw that the reporter did not understand French, he said in halting English that the story of Hua Mulan moved him to tears. He repeatedly said that the dance was so beautiful and expressed his appreciation for Chinese culture.

"I liked every dance they performed," said veteran editor Carolyn from the Entertainment Department of CTV, the largest station in Canada, "Their costumes, music, dances, and colors were beautiful."

An African-American lady had a long conversation with the reporter after the show. She expressed that the performance was marvelous and praised Chinese culture. 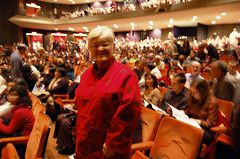 Louise started learning Chinese at China's Nankai University in 1985, and she has been to China 25 times. She has visited many famous mountains and historic sites, especially the Silk Road. She said that today's performance reminded her of the Chinese history she had read.

On the afternoon of January 14, NTDTV's Chinese New Year Spectacular was put on in Montreal for the second time. Several dozen Western couples from Quebec came to watch the performance with their adopted children from China. They wanted these children to learn about Chinese culture.

Many of the parents said that bringing their children to watch the traditional Chinese performance was to let them remember their ancestors' culture and tradition. In the meantime, they expressed that they also love Chinese culture. 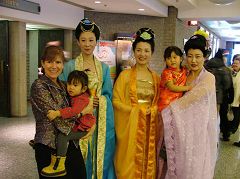 Lise, her husband and her mother, who live in the South Bank area of Montreal, came to watch the performance with her two adopted daughters from China. Lise said that the performance helped her connect to the China that she had learned about from books. She said that the dance "The Vow of Old" and "The Dunhuang Dream" were very impressive. Lise said that she understood the story of "The Loyalty of Yuefei", which conveys the concepts of patriotism and noble commitment. She expressed that many French people like Chinese culture because of its own rich heritage, and many people are curious about China's long history. Lise said that Chinese culture is very exquisite, just like tonight's dance performances. Every movement is slow, but each expresses a meaning and tells a story.

Paul and his wife watched the performance on Sunday afternoon with their adopted daughters from China. Paul commented that the performance was spectacular. The dancers agile steps made him think about the profound significance of Chinese culture. He said that he is a technical teacher in a professional school where there are many Chinese students. He will recommend this NTDTV's Chinese New Year Spectacular to them, and said that his family will come for the show again next year.