On January 6, 2007, the Service Center for Quitting the Party and Falun Gong practitioners held a rally and a parade in Chicago's Chinatown to support 17 million withdrawals from the Chinese Communist Party (CCP). 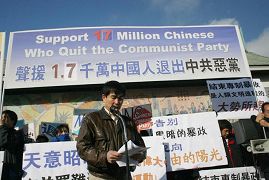 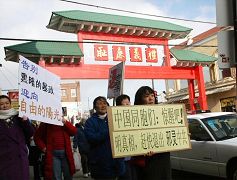 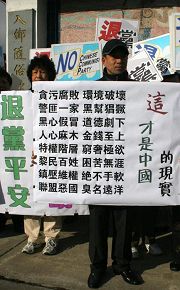 Many people attended the rally, holding banners. The Nine Commentaries on the Communist Party helps Chinese people recognize the evil nature of the CCP and has encouraged many people to quit the party. In December 2006, more than one million people quit the party, and the total number of withdrawals reached 17 million. The trend of quitting the party will bring a bright future to China and its people.

After the rally, a parade was held. Volunteers for the Service Center for Quitting the Party handed out flyers along the parade route. One volunteer tried to give a flyer to a Chinese gentleman. The man gave him the thumbs-up and said in Chinese, "I am done! I already quit."

Mrs. Ye, a volunteer from the service center and also a Falun Gong practitioner, said that one of her friends, who is an activist in the Chinese community, heard about the rally and attended it. The friend said to Mrs. Ye, "You should hold more activities like this; please inform us about them. We really want to come."

Many Chinese people accepted the flyers and materials from the volunteers. Mrs. Ye's friend was very touched, and said, "People's attitude toward quitting the party is really different now. They refused to take any materials a year ago, but now, they even mingle and talk to the volunteers when they are accepting the materials."