The Brutal Torture and Death of Mr. Lei Ming, Who Broadcast Truth Clarification Videos in Changchun City in 2002 (Photos)

(Clearwisdom.net) Falun Dafa practitioner Mr. Lei Ming, 30 years old, lived in Baishan City, Jilin Province. He worked with other practitioners, and successfully broadcast the truth clarification videos about Falun Gong on a cable TV network in Changchun City on March 15, 2002. The videos exposed the lies fabricated by the Chinese Communist Party (CCP) and Jiang Zemin's regime. This helped many people awaken from the bombardment of the CCP's lies about Falun Gong. 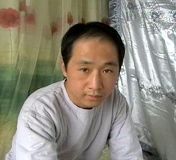 Mr. Lei was illegally arrested after Jiang's regime issued the order "kill without pardon." After he was savagely tortured in Tiebei Detention Center, he was sentenced to 17 years in prison in Changchun City Intermediate Court. He was sent to Jilin Prison, where he was subjected to the "Stretching Bed" torture and other cruelties, in addition to around-the-clock brainwashing, threats, and intimidation. These gross abuses led to disability in both legs and muscle atrophy. He could not walk, could not take care of himself, and also had severe, active tuberculosis. Jilin Prison officials sent Lei Ming back to his family in November 2004 when he was on the brink of death. He weighed only about 77 pounds, and he was extremely weak. The local police and prison officials constantly harassed him at his home after his release. He went into exile to avoid the harassment and died on August 6, 2006.

Torture at Division 1 at the Changchun City Police Department

The police placed Mr. Lei on a Tiger Bench, tied his legs and tightened the rope, inserted a metal bar through the holes in the two armrests, and locked the bar in place. They handcuffed him behind his back over the chair back with his armpits pressed against the chair back. They then put a leather belt through the handcuffs and through the lower column of the chair legs and upwards. Two officers violently yanked the belt downward while another officer fiercely kicked the handcuffs to increase the pain.

More officers besieged Mr. Lei and slapped his face. Two officers, each carrying an electric baton, removed his clothes. They proceeded to shock his neck, mouth, thighs, chest, genitals, and anus, making Lei Ming scream in pain. The police did not stop until the charge in the electric batons had run out.

Photos Reenactment photos of the tortures experienced by Mr. Lei

While they recharged the electric batons, another two officers wrapped Lei Ming's head in a plastic bag. They tightened the bag opening around his neck, so no air could enter. Mr. Lei almost suffocated. They loosened the bag and tightened it again after he had taken just a few breaths. They repeated this until the batteries in the electric batons were fully charged. Another two officers joined in and began shocking Mr. Lei. They also took a screwdriver, heated it on the stove, and burned his neck with it until pieces of charred flesh and skin peeled off.

Lei Ming gritted his teeth to bear the pain. The police shocked the fresh burn wounds on his neck with electric batons and then poured water down his neck. The pain was unimaginably excruciating. The police covered his head with a big metal bucket and banged the bucket as hard as they could with a huge metal bar, producing a deafening noise. The police also inserted a wooden stick into his anus before shocking his anus with an electric baton to cause even more pain.

Within four or five hours, the bones in Mr. Lei's arms and wrists were pulled out of joint. His clothes were soaked with sweat. One officer took Mr. Lei's hands, which were cuffed behind his back, and raised them as far as he could, forcing Mr. Lei's chest to press against his thighs and making the metal bar grind against his stomach. They kept him in this torturous position for about five minutes. His right arm was dislocated at the shoulder joint from being forcefully jerked upwards, and his right forearm turned black and was disabled, swinging listlessly in the air. Both of his hands were swollen, and his fingers were two to three times their original size.

The police took turns torturing Mr. Lei for four days around the clock. They eventually took him to Tiebei Detention Center where, on arrival, he was told to take off his clothes for a physical inspection. The guards at the detention center saw that he was severely wounded and refused to accept him. However, officers from the city police department talked them into accepting him.

After Lei Ming had entered the cell, he was first told to take a shower and get a haircut. When he took off his clothes and his injuries were revealed, all the prisoners were shocked. He had black electric shock wounds and burn wounds on his neck and the rest of his body, along with scars on his wrists, arms, and ankles. The injuries were horrific. The head prisoner said, "Before I saw this, I did not believe that Falun Gong was severely persecuted! Now I totally believe it, and I also believe that the CCP will collapse, for such a ruthless regime cannot last."

Mr.. Lei was held at Tiebei Detention Center in Changchun City for more than six months, and, as stated above, Changchun City Intermediate Court sentenced him to 17 years in prison. He was sent to Jilin Prison on October 25, 2002, and held in Group 1 of Prison Ward 4, now called Ward 7. Several inmates brutally beat him on the first day. They tried to force him to write a guarantee statement, flicked his eyeballs, and crushed his testicles. He protested the cruel treatment. Group head Song Yufeng and guard Liu Tiejun sent him to the Strictly Controlled Team for more intense persecution.

The officials used a special bed to stretch Lei Ming, which immobilized him for seven days, inflicting great physical pain. After that, they forced him to sit on a small bench from 4:50 a.m. to 7:30 p.m. daily. They gave him only a small bun and a bowl of vegetable broth for each meal.

Lei Ming's health deteriorated after five months of torture in the Strictly Controlled Team, and his weight dropped from 143 to 72 pounds. He could hardly walk and was sent back to the regular section of the prison.

The officials saw Mr. Lei reading Teacher's articles on February 18, 2004. Guards Song Yufeng, Liu Tiejun, and Yu Zhongze sent him once again to the Strictly Controlled Team and held him there for four-and-a-half months. During this period, officers Li and Wang from the Education Section probed and pressured Mr. Lei every day for the source of Teacher's article, which caused him to vomit blood for a long time. He was severely emaciated.

Mr. Lei Ming was carried back to the regular prison cell on July 2, 2004. He was skeleton-like and could not walk or take care of himself. He developed symptoms heart disease, acute, active tuberculosis, and several other illnesses. The authorities sent him to the Jilin Prison Hospital on November 8, 2004, and transferred him two days later to the Changchun Labor "Re-education" Hospital where he stayed for four days. After that, Mr. Lei was transferred to the Jilin Railroad Hospital where he remained for 15 days. The prison authorities refused to pay the medical fees because they thought he was not going to live very long. They didn't want to take responsibility for his death and released him on medical parole in 2004. He was already on the brink of death.

Mr. Lei Ming passed away in exile as a result of the ruthless persecution

Lei Ming was carried home from prison. Although only 30 years old, his legs were disabled and the muscles atrophied, the result of barbaric torture, and he could not walk. He also had severe tuberculosis and could not take care of himself.

The local police and prison authorities frequently harassed Mr. Lei at his home to further persecute him. He had no other choice but to go into exile. He weighed only 72 pounds when he left prison and was bedridden. He coughed constantly and had difficulty breathing. He could not sleep at night and had to sleep partially sitting up. If he lay flat, he would choke on phlegm. He could not eat much at all, and he was skeleton-like. He finally passed away at 7:00 a.m. on August 6, 2006.

Falun Gong practitioners walk through streets and villages to distribute flyers and post banners. They endure pain and suffering with fortitude. They risked their lives to broadcast videos to clarify the truth about Falun Gong and to reveal the beauty of Dafa. At the same time they are exposing the bloody persecution that is "top secret" and heavily guarded by the CCP. They awaken people's conscience and kindness within their hearts.

As Fa rectification rapidly pushes forward, the wicked Chinese Communist Party will completely disintegrate in the near future, and the history books will record the magnificent acts of Dafa practitioners rescuing sentient beings.