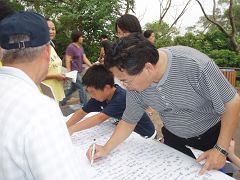 Many tourists signed the petition to condemn the illegal organ harvesting

More than forty practitioners in Hsinchu displayed banners, distributed truth-clarifying materials and talked to tourists in person about the organ harvesting atrocities at the famous Fortune Kiosk.

One woman was a bit confused at the beginning and asked, "Why should happenings on the Mainland matter to us in Taiwan?" A practitioner replied, "It matters greatly. Currently, many Taiwanese citizens are going to China for organ transplants. However, as there is no guarantee of a successful operation, many have run into big trouble after they came back to Taiwan. Some died."

Four young Koreans were attracted by the signature drive. After they learned about the cause of this activity through a friend, they all signed the petition.

A gentleman who works at the Science-Technology District in Hsinchu told practitioners a true story. A manager traveled to the Mainland on business. He had to have an operation in a Chinese hospital due to acute appendicitis. After he came back, one day he felt sick and went to the hospital. After an x-ray examination, the doctor told him that one of his kidneys was missing. He was dumbstruck.

A couple from South Taiwan told practitioners that one of their fellow villagers went to the Mainland for organ transplant surgery and passed away shortly afterward.

During this "truth-clarification" effort, more than 1,000 copies of informational materials were distributed. The practitioners hope that people who received the materials will spread the facts about the atrocity and the persecution of Falun Gong to their neighbors, friends and relatives.