(Clearwisdom.net) On the morning of August 28, 2006, two people sat meditating in front of the Brooklyn Supreme Court in the drizzling rain. Behind them, banners and pictures protested the Chinese Communist Party's (CCP) brutal persecution and murder of Falun Gong practitioners. 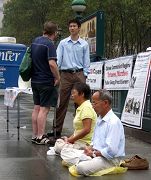 Clarifying the truth to a passerby

Falun Gong practitioner Frank spoke to the passersby through a megaphone. He said they had no other choice but to rally here because they needed to be a voice for the people on the other side of the Earth, their friends and family members in China. The Chinese Communist Party has persecuted Falun Gong for seven years and the persecution is still continuing.

Frank said that his grandmother, an 83-year-old Falun Gong practitioner from Jiangsu Province China, was frequently harassed and threatened by the local police, forcing her to give up practicing Falun Gong.

Frank continued, "Recently, former Secretary of State (Asia-Pacific) for Canada, David Kilgour, and human rights attorney David Matas published their independent investigation report about the CCP removing organs from living Falun Gong practitioners. In their report, they said that the evidence gathered during their two month investigation led them to believe that the claim is true. They believe a large-scale organ harvesting crime exists and is still happening today in China. Kilgour said that more evidence is to be published in October.

"We call on everyone to help stop this massacre. Please write letters to your congressperson, senator, city council member, and state representatives. Tell your family, your friends, and everyone you know.

"This massacre is more than just about belief and human rights. It is a question to everyone's soul, it requires every person, every government to make a choice between self-interest and conscience. This choice, in turn, will decide every person's own fate."

For two hours, Frank talked to passersby, asking people to help stop the most evil crime on the earth. Several Falun Gong practitioners were passing out truth-clarification materials including "Falun Gong Today" to passersby. Some people talked to the practitioners to ask for more details, and they signed their names to the petition form calling for an end to the persecution.

The couple doing the meditation were 69-year-old Mr. Zhao and 57-year-old Mrs. Zhao. Mrs. Zhao immigrated to the United States in 1982. In 1996, she was diagnosed with diabetes and hypertension and she became very weak. Mr. Zhao took her to visit doctors and they tried many qigong exercises in an attempt to find a cure. Finally, a friend introduced Falun Gong to them, and after only three months of doing the exercises, all of Mrs. Zhao's diseases were gone. Since then, the couple has practiced Falun Gong diligently. In 1999, Chinese Communist Party began to persecute Falun Gong. Shortly after, Mrs. Zhao began to clarify the truth and protest in front of the Chinese Consulate, Monday through Friday, year round.