(Clearwisdom.net) After their trip to Sweden, David Kilgour and David Matas, the two Canadian independent investigators and authors of the Report into Allegations of Organ Harvesting of Falun Gong Practitioners in China, came to the capital of Finland, Helsinki. In the morning of September 6, 2006, they introduced their report to the media. Finnish Member of Parliament and the Leader of the Green Party, Hautala, came to show support. Many mainstream Finnish media reported the event in conjunction with the approaching EU-China Summit in both Finnish and Swedish languages. The Parliament will bring up the subject of live organ harvesting when discussing Summit agenda with the Finnish government this week. 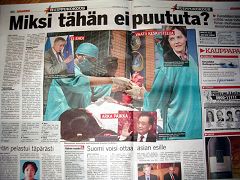 Wish of a Former Nazi Soldier

David Matas stated at the press conference, while the incident happens in China, the Chinese Embassy refused their visa application. Therefore they interviewed various related witnesses, listened to the recordings of telephone interviews of Chinese medical personnel, and collected eighteen pieces of evidence to prove that organ harvesting from live Falun Gong practitioners for profit is indeed happening in China.

David Kilgour, who used to be the Canadian Secretary of State for the Asia Pacific Region, mentioned that since the report came out they traveled to many countries in Europe, Asia, Australia and the Americas, telling governments and people about the tragedy that is happening in China, generating huge impacts. Having learned this from his daughter, an eighty-nine-year-old former Nazi soldier in Germany wrote to them. He had lived in pain all his life for being implicated in Nazi Germany's crimes. He hoped this kind of thing would never happen again anywhere on earth. He looked forward to various governments doing their best to stop the atrocities in China as soon as possible.

Member of Finnish Parliament: "Beyond Imagination."

Finnish Member of Parliament and the Leader of the Green Party, Hautala, hosted the press conference. She had read the independent investigators' report overnight. She felt that both the report and the method of investigation were so well organized that it left no room to doubt the findings in the report. Contents of the report shocked her, "This is beyond imagination." The Chinese Communist Party's (CCP) attitude after the report came out reminded her of the response typical of the Communist Party of the former Soviet Union.

In her opinion, based on this fact, the Finnish government should bring up this subject on the EU-China Summit that is to be held on September 9 and the EU-Asia Summit that is on September 10-11. The Chinese Premier, Wen Jiabao, will attend the Summit with a delegation. There was big reaction after Finland's main media aired the Report. The Green Party and Christian Democratic Party within the Parliament have already decided to jointly bring up this subject to the Finnish government prior to the EU-Asia Summit.

The Amendment stated, "(The European Parliament) calls upon the Chinese authorities to reveal the whereabouts of human rights lawyer Gao Zhisheng, one of China's most outspoken lawyers and dissidents who is held on suspicion of criminal activity, and to release him unless he is to be charged with a recognized criminal offence; similarly calls for the release of Chen Guangcheng, a peasants' rights advocate who has helped citizens in their attempts to sue their local authorities for carrying out forced abortions and sterilizations and who was sentenced to more than four years in prison, and of Bu Dongwei, who has been assigned to two and a half years of 'Re-education through Labour' (RTL) and who is detained at an undisclosed location; therefore urges the authorities to ensure that all human rights defenders can carry out peaceful and legitimate activities without fear of arbitrary arrest, torture or ill-treatment and that they be given access to proper legal representation in the event of arrest."

Passed on September 7, the Amendment supplemented the resolution on China's human rights conditions drafted by Hans Belder, a member of Independence and Democracy party and a Dutch MEP. When criticizing human rights conditions in mainland China, the resolution especially "Deplores the contradiction between the constitutional freedom of belief (enshrined in Article 36 of the Constitution) and the ongoing interference of the State in the affairs of religious communities." The European Parliament was deeply concerned by the existence of torture and "Re-education through Labour" facilities in China. The European Parliament demanded China to do away with the death penalty and to abstain from threatening, persecuting and arresting advocates of freedom of speech.

According to Central News Agency, the European Parliament, which represents people of the EU, passed this resolution prior to the Summit with the intention to remind leaders of the EU to remain cautious when considering strengthening strategic and trade partnership with China. Attention should be paid to China's poor records on other fronts.

On the day before, three MEPs wrote a joint letter to the Foreign Secretary of the European Commission, asking him to verify the live organ harvesting allegations with the Chinese delegation at the EU-China Summit.

Finland holds the EU's rotating presidency in the second half of this year, which is the reason why the bi-annual EU-Asia Summit is held in Helsinki. Official languages in Finland include Finnish and Swedish. Finland is one of the few countries where the Parliament participates in the policy making of the EU.