In 1999, Falun Dafa practitioner Mr. Li Yukun and others from Qianliangtai Village, Guojiatun Town, Zhucheng City, Shandong Province, went to the Weifang City administration. This happened when they heard that Jiang Zemin was going to ban Falun Gong. To validate Falun Dafa and tell how good is was, they went to higher government bureaus after the local government ignored their appeal. Mr. Li Yukun and another practitioner took a train from Weifang City to Beijing. The night of their arrival in Beijing, CCTV, the radio, and other media broadcast lies to slander the founder of Falun Gong. The persecution had begun.

Mr. Li returned by train the next day at noon. The practitioners who had gone with him were arrested in the morning. After he got home, government officials took Mr. Li to the village Party Committee. They tried to coerce him to write a statement to renounce Falun Gong. They wouldn't let him go home. His family brought him food. All the practitioners in the village were arrested, and only those who wrote "guarantee statements" were released. They were forced to hand in their Falun Dafa books. Other practitioners went home. Mr. Li Yukun was the only one still held in the government office.

Persons from the town Party Committee and from the police department pressured him. They surrounded his house at night and harassed him late at night. His wife was scared. She went to the village Party Committee and subsequently almost suffered a nervous breakdown. Li Yukun was adamant and said, "If something happens to my wife, you will take the responsibility!" He didn't study the Fa very much, however, and wrote a guarantee statement against his better judgment. The police started monitoring his residence from then on, fabricated charges against him, and tried to arrest him.

Before the wheat-sowing season, police officer Cao Jinhui led a few people to ransack Li Mr. Li's home. They took him to the police department. Cao Jinhui and two other people savagely beat him the next morning and again in the afternoon. They sent him to a custody center at dusk. The three officers, including that same Cao Jinhui, went to the custody center and beat him in the center's office for more than one hour. Cao Jinhui struck Mr. Li Yukun to the ground and hit his head and face with a broom until he broke it. He grabbed Mr. Li's hair and yanked out a large fistful. Persecutor Cao screamed, "I'll make sure to peel off several layers of your skin and make you shed a few pounds. I let you off the hook too easily last time, because I didn't beat you when you came back from Beijing. I hadn't received instructions then; now, nobody cares if I beat you to death!" Cao Jinhui beat Mr. Li Yukun until his eyes became bloodshot and his eye sockets were black and blue. The bruises remained for about 20 days. 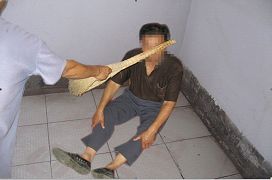 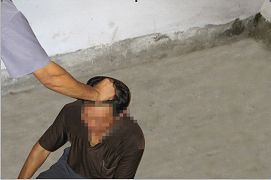 Mr. Li Yukun was held at the local administration building after release from the custody center. His family sent him food and he was forbidden to go home. The Party officials harassed him daily until he went home. He lost more than his personal freedom.

Through discussions with other practitioners, Li Yukun realized that it was not correct to write a guarantee statement and that he should nobly do things a practitioner is supposed to do. One day, Qin Jie, head of the police department, and Chen, secretary of the Political and Judiciary Committee, called him to the village Party Committee. They inquired if he had had contact with other Falun Gong practitioners during the past few days. He said, "No one contacted me, but it's impossible for me to stop practicing Falun Gong, because my health would fail if I stop practicing." The two officials immediately flew into a rage. The police watched him even more closely afterwards.

Mr. Li had a discussion with fellow practitioners in 2002, when the [local] persecution was most severe. They all realized that they must validate the Fa. Practitioners Guo Jinlan, Cao Peixiu, Cao Huifen, Wang Guiyun, Wang Airong, and Li Yukun rode bikes to Beijing to validate Dafa. The environment was quite hostile then. The police inspected people at intersections, bridges, and many other places. The six practitioners had no choice but to take detours to avoid the police. They often slept in fields. It was very hot in July, but they managed to get to Beijing. They were arrested the next day and taken to the Weifang City Liaison Office in Beijing. Sun Juwu led a group of officers who arrived in a vehicle from Guojiatun Town to fetch the practitioners. Sun Juwu beat Mr. Li immediately after he arrived at the liaison office and also hit his head.

They took the practitioners overnight to Guojiatun Town, arriving at dawn. Qin Jie and others used various types of tortures, including shocking Li Yukun's head with electric batons. They forced him to lie face down on the ground and then hit him with rubber clubs down his back all the way to his ankles. His entire back, buttocks, and the backs of his thighs and calves turned black. He rolled on the ground, screaming in pain. Police officer Qin Jie also used great force to kick Mr. Li's head, face, chest, collarbone and other body parts with his hard boots, and then he ground his calves with his boots.

In the afternoon, Qin Jie and others took Mr. Li Yukun to the conference room at the town Party Committee. Qin Jie said, "I'll make sure to beat you to death." Cao Jinhui arrived at noon and started beating Mr. Li immediately. After Cao Jinhui was exhausted, he forced Mr. Li to stand outside in the sweltering heat.

He beat Li Yukun again in the afternoon and asked who had told him to go to Beijing. Mr. Li gritted his teeth and refused to cooperate with Cao Jinhui, who beat him for a whole afternoon. Cao sent Mr. Li to a detention center near dusk. Right after Li Yukun got into the car, police officer Qin Jie took out a pagoda tree branch about 0.5 m [1.6 ft] long and 10 cm [3.9 inches] and stabbed at Mr. Li Yukun's chest with it. He dodged the stick and it rammed into his arm. When the stick was pulled out, his arm was left with a crescent shaped wound, which became infected a few days later. He also had two infected wounds on his collarbones, two infections on his calves, and his legs had turned black from beating. Someone told his family that Li Yukun's legs were broken from beating, and the inmates asked him, "Old man, what did they use to beat you so severely?"

Several days later, Mr. Li got to know the inmates and clarified the truth to them. One inmate said, "Old man, I think you are the only good person in here." The swelling on Mr. Lin's legs didn't go down even after a month at the detention center. 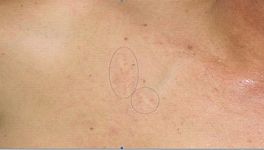 The marks near the collarbones are the result of infected wounds (later healed) after officer Qin Jie kicked Mr. Li with hard boots. The marks are clearly visible six years later.

It was later heard that Qin Jie led some people to pick Li Yukun up at the detention center. Qin Jie pointed at a man who was Mr. Li 's classmate and asked Li Yukun whether he recognized the man. When Li Yukun said yes, Qin Jie flew into a fury because Mr. Li was still clear-headed. Qin then jumped up and kicked Li Yukun. He held Li Yukun at the village Party Committee and sent people in groups of two to take turns monitoring him. He forced Li Yukun to work during the day. Qin Jie went to Mr. Li's village to check on him in the morning, afternoon, and evening each day, and proudly announced that his bonus for the year was secure [because Li Yukun could not leave the village to appeal for Falun Gong].

Mr. Li didn't cooperate with the officials. Four generations of his family lived in a small, three-room house. He said to Qin Jie, "You should sell my house, because you have almost driven my family insane: they sleep with their clothes on, especially my mother, because you come to harass me all the time at night. My mother is so frightened that she gets scared at any car that she sees in the street. There are so many cars in the street, she gets increasingly frightened." His 81-year-old mother was frequently harassed. She had a stroke in 2004 and lost the ability to take care of herself. She also developed neurasthenia and cannot sleep at night.

This is not an isolated case in Zhucheng City; it is widespread throughout the country.

The persecution peaked in the spring of 2001. Mr. Li Yukun's son worked as a Public Relations person at a factory. Mr. Li took his son to Qingdao City to meet with one of his former business partners. They could not return the same day. When Li Yukun got off the train the next day at Pengwangqiao, he was immediately taken to the police department and savagely beaten. Officer Qin Jie kicked out two of his front teeth and scraped his mouth with a filthy rag until blood oozed from his mouth. Qin Jie then hit Mr. Li's head with a wooden stool until it shattered. He stomped on Li his head with his hard boots and tortured him with all types of tactics. The reason he gave for beating Mr. Li was that he did not find Li Yukun at home, and Li Yukun was not allowed to leave home. He also harassed and intimidated Mr. Li's relatives at their homes.

Qin Jie and other officials tortured Mr. Li until the next evening and tried to coerce him to write a guarantee statement. He firmly refused. They sent him to the Zhucheng City Detention Center in the evening.

Qin Jie kicked out two of Mr. Li Yukun's front teeth, then he smacked his head with a small wooden stool. After the stool shattered, he stomped on his head with his hard boots.

Mr. Li Yukun returned home from the detention center one month later and was again placed under long-term surveillance. The police and Party officials often tricked him into appearing at the police department and village government and held him for a few days each time. Qin Jie also said to Mr. Li, "Others have committed suicide. Why don't you do it, too? You should quickly kill yourself! We'd feel much better if you committed suicide."

Qin Jie and the village Party officials also fabricated charges against him in order to further persecute him. Qin Jie divulged this while beating Mr. Li,who cannot figure out to this day how the officials came up with the false accusations.

Mr. Li Yukun is deprived of his personal freedom due to long-term surveillance.