Participating in the Caribbean Festival Parade in Hamilton

The Toronto chapter of the Divine Land Marching Band is composed of 120 Falun Gong practitioners. The band partiipated in the Caribbean Festival parade held on Saturday, August 12, 2006, in Hamilton, Ontario. The steady drum beats and powerful music won a round of applause from the spectators.

The marching band participates in the Caribbean Festival parade in Hamilton

A woman in an antique car driving in front of the Divine Land Marching Band greeted this reporter, who was taking photos. She said, "The music performed by the marching band behind is so pleasant to the ear. I have been beating time with them; it sounds so powerful!" She took out a flyer about the Canadian independent investigative report and asked, "Does what it says here have something to do with the marching band?"

When she learned that all members of the marching band were Falun Gong practitioners, she said, "How come a group that can display such a beautiful thing suffer such brutal persecution? We're going to the Toronto Police Department to do some business next week. We'll bring up this matter, and request them to take measures to stop the Chinese government's atrocities."

The reporter saw several employees of a Chinese restaurant rush out. One of them said, "Falun Gong has such a big marching band! It's really marvelous." Another said, "Life is free overseas; if [they were] in China, they would be suffering." When the reporter asked them if they knew about the persecution of Falun Gong in China, a middle-aged man said, "We do know about it; it's very serious. We have been here several years. What we see here is completely different from what we saw inside China." 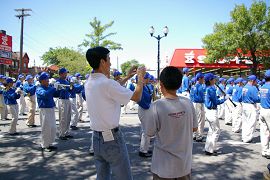 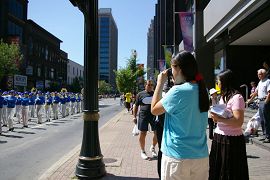 "I want to record Falun Gong as I have seen it"

A Chinese man watched the parade with his 13 year-old son. The man kept taking photos of the marching band from different angles. He said to the author, "The propaganda I saw in the mainland, and what I see here, are two completely different things. I will remember what I have seen here."

A western woman watched the marching band, and said while clapping her hands, "Wonderful! Wonderful!" She held up the flyer that Falun Gong practitioners handed to her and said to the reporter, "I'll take a good look at it after returning home. I'll find a practice site to learn the exercises from them."

Another man kept taking photos of the marching band. He asked the reporter who was also taking photos, "Can I find information about this marching band from this flyer?" The reporter said, "Yes, you can, there is a website address on the flyer." The man folded the flyer, put it in his pocket and said happily, "I'll keep it, and I'll go to the website to get to know about it, so I can see what has made them perform such great music."

In the afternoon, at the performance site near a lake in the park, the marching band and the Falun Gong exercise demonstration attracted many more local citizens. Many of them imitated the movements as the practitioners demonstrated the exercises.

Clarifying the Truth in Toronto's Chinatown

On Sunday, August 13, 2006, several members of the Divine Land Marching Band went to Chinatown in downtown Toronto to join the Chinese "Fun Day" celebration. Besides performing the music, "Falun Dafa is Good," they also sang songs including, "Coming For You" for the audience. 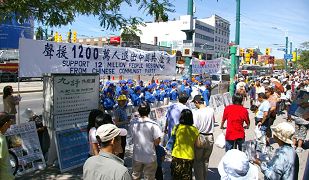 A woman who hurriedly passed by suddenly stopped and said, "It's so rare to be able to hear such a high-level soprano sing." She stood aside and listened for quite a long time. Finally, she left, satisfied, with a copy of the Nine Commentaries on the Communist Party.

A couple from Cuba passed through Chinatown. The wife stopped and said to the Falun Gong practitioners, "He (her husband) has been thoroughly brainwashed by the Communist Party, so has been his entire family." The wife took the Nine Commentaries from a practitioner, and said emotionally, "Thank you very much! I'll read this to him every day. Even if he falls asleep, I'll continue reading it to him."

An older Chinese person, Mr. Yu has lived in Canada for over 40 years. After watching the marching band's performance, he joined people who supported the withdrawals from the CCP and its affiliated organizations. He stood up and said, "The Communist Party is absolutely not credible, it has no law at all. It always speaks, but not you. If you believe in the Communist Party, that is truly troublesome. The earlier one quits the CCP, the safer he or she will be."

The marching band's performance attracted many passersby to come learn the facts about Falun Gong. Some people signed the petition to call on the Canadian government to help stop the CCP's persecution of Falun Gong, and some people asked for the Nine Commentaries and other truth-clarification materials.