(Clearwisdom.net) On July 20, 2006, Falun Gong practitioners from Auckland assembled in front of the Chinese Consulate to hold a candlelight vigil in memory of the practitioners who have been persecuted to death for their beliefs. Many citizens were moved by the practitioners. Practitioners displayed a banner reading, "Condemn the Chinese Communist Party’s Harvesting Organs from Living Falun Gong Practitioners," which clearly exposed the seven-year brutal persecution by the CCP. The peaceful protest also helped citizens who passed by to feel the spirit of "Truthfulness-Compassion-Forbearance." 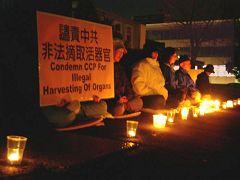