(Clearwisdom.net) The Chinese Communist Party’s (CCP) persecution of Falun Gong has persisted for seven years. During this time, the CCP has applied all torture methods it can think of in an attempt to force Falun Gong practitioners to give up their belief in Truthfulness-Compassion-Forbearance. As of today, it has been verified that thousands of practitioners have died as a result of the persecution, and hundreds of thousands of practitioners have been arrested and many are missing after their arrests. 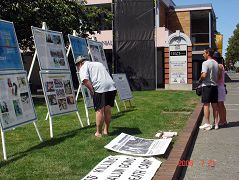 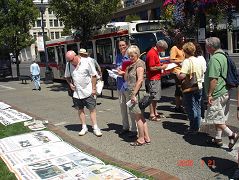 People read carefully the truth clarification display boards, and sign the petition to call for an end to the persecution

Recently, the independent investigation team composed of former Canadian MP David Kilgour and international human rights lawyer David Matas conducted an investigation into the allegation of organ harvesting from living Falun Gong practitioners, and released their investigative report on July 6, 2006. Mr. Matas commented, "This is a form of evil we have yet to see on this planet." The investigation came to the regrettable conclusion that "there has been and continues today to be large scale organ seizures from unwilling Falun Gong practitioners in China."

At noon on July 21, 2006, Falun Gong practitioners in Victoria, BC, Canada held a rally on the lawn in front of the city hall to expose the persecution. They displayed photos from the Nine Commentaries on the Communist Party, exposing the CCP’s torture methods used to persecute Falun Gong practitioners and the atrocities of live organ harvesting. They wanted to help more people learn and see clearly the CCP’s evil nature, and call for people to combine their efforts to stop the CCP’s atrocities.

A local newspaper and a TV station conducted interviews and filed reports on the activity. Another broadcasting station also interviewed practitioners on the phone after the activity was over that day, and made a timely report on the activity and the feedback from local people. This was the second time in two consecutive days that it reported on Falun Gong. On July 20th, the broadcasting station invited two practitioners to do live interviews and showed a positive report on Falun Gong. The announcer also announced that the practitioners would hold a rally in front of the city hall on July 21st, and read some parts from the investigative report about live organ harvesting.

It was very hot on July 21st. The practitioners clarified the truth and distributed the materials in the burning sun. Many passersby stopped to look at display boards, sign the petition to support Falun Gong and condemn the CCP’s atrocities. A western couple spent quite a long time carefully looking at the display boards from beginning to end. During this time they also learned some detailed information. Before leaving, they signed the petition and expressed, "The CCP is so evil, but how come our government and the media can be so silent on it."

Another young man listened to practitioners clarify the truth, and said, "Every one of us has the right to belief. The government cannot force others to give up their belief. The CCP is totally wrong." He signed the petition on his own initiative and shortly after, he came back with a friend and pointed at the photos while explaining the truth about the CCP’s persecution of Falun Gong. He told his friend where to sign his name. Before leaving, he said to practitioners, "Good Luck."

A Chinese man was very happy to get a copy of the Nine Commentaries brochure. Two other Chinese young men who were in a hurry walking, accepted the Nine Commentaries brochure, DVD and truth clarification materials exposing the CCP's live organ harvesting before finishing listen to the practitioners. They said they would study them after returning home. A Japanese girl student wanted to learn all information related to Falun Gong, and asked where the practice site is.

A kind woman was very sad after hearing about the CCP’s harvesting organs from living Falun Gong practitioners. She said, "Too evil!" After signing the petition and before leaving, she saw that the weather was so hot and the practitioners worked so hard, she said that she had four bottles of soft drinks in her handbag, and would like to give them to the practitioners. The practitioners thanked her for her kindness and support.