(Clearwisdom.net) On July 20, 2006, citizens in Taoyuan County condemned the Chinese Communist Party’s (CCP) brutal persecution of Falun Gong practitioners. At 7:30 p.m., they held a candlelight vigil in front of the train station in Taoyuan County. Huang Wanru, the representative from Taoyuan County, came to give a speech and condemn the CCP's brutality. 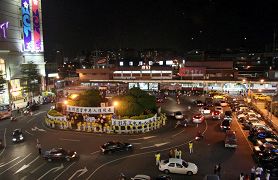 The Canadian Independent Investigation Group, consisting of Mr. David Kilgour and David Matas, concluded that allegations of organ harvesting were true. Mr. Matas called it a "form of evil that we have yet to see on this planet."

Group exercises at the candlelight vigil

Mr. David Kilgour said that the most astonishing thing is that a woman testified that her ex-husband was involved in harvesting corneas from more than 2,000 Falun Gong practitioners. Nobody lived after the corneas were removed, because they not only harvested corneas, but also harvested the heart, pancreas, kidneys and liver. This is the biggest shame in the 21st century.

Practitioners in silent tribute to those who were persecuted to death

Professor Chang Chiing-his, a representative of the Falun Dafa Association, said that the results of the investigation verified the allegations of the tragedy. Chang Ching-his called upon Taiwanese doctors who are going to Mainland China to think about this issue, and to urge the CCP to enact rigid laws relating to the organ transplant trade. Chang Ching-his said that organ transplants in China should be inspected by international human rights organizations.

At the candlelight vigil, the organizers urged the Taiwanese people, especially lawyers, to stand up and condemn the CCP’s crimes in public. Practitioners also called upon Taiwanese to support the Coalition to Investigate the Persecution of Falun Gong (CIPFG).

Many citizens were shocked by the CCP’s brutality. Some of them even cried. Many people could not believe that such a brutal thing is happening in the 21st century.

Practitioners sang the song, "Coming for You," which moved many people. They hope that everybody can stand up to stop the evil "that we have yet to see on this planet" and create a wonderful future for human beings.