(Clearwisdom.net) At 10:40 a.m. on June 26, 2006, a Chinese man who entered Korea one week before violently assaulted a Korean practitioner who was protesting against the persecution of Falun Gong by herself in front of the Chinese Consulate. At 12:40 p.m. on the same day, the Seoul South Gate Police Station arrested Cui Hai, male, 36 years old, for suspicion of violence, damaging others’ property, and interfering with others’ business. He tore the practitioner’s banner and some truth-clarification brochures in front of the Chinese Consulate and violently broke practitioner Ms. Zhao’s truth-clarification materials. Ms. Zhao is a 36-year-old lady who was conducting the peaceful protest there. 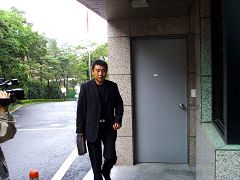 The attacker hiding in the Chinese Consulate arrested and found guilty 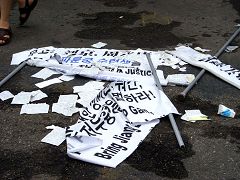 Banner torn by the attacker

Ms. Zhao, who held a banner in front of the Chinese Consulate and peacefully protested, said, "A man in his 30s suddenly came forward and tore the banner while cursing. He attempted to tear the flyers in my bag." The banner said, "Bring to Justice Jiang Zemin, Luo Gan, Liu Jing and Zhou Yongkang - the culprits for persecuting innocent Falun Gong practitioners." Cui Hai violently pulled Ms. Zhao's shoulder and arms, trying to get her bag. Fortunately, two Pakistani men that were nearby stopped him, and Ms. Zhao was not attacked more violently. At that point, a police officer passed by. Cui Hai was afraid of being arrested and immediately hid in the Chinese Consulate.

After Cui Hai was protected for more than two hours in the Chinese Consulate, he came out at 12:40 p.m. and attempted to confront the Falun Gong practitioners. He was then arrested by police.

Cui Hai entered Korea on June 19. He has been to Korea many times based on his passport. A Korean judge ruled that he was guilty on June 27 and fined him.

The Falun Dafa Association of Korea believes that the incident was not accidental, but orchestrated by the CCP.