(Clearwisdom.net) Falun Gong practitioners from Tongxiao and Yuanli Miaoli Taiwan organized a half-day Fa-study and sharing at the Rotary Club on June 25, 2006. The practitioners in the Yuanli area are mostly seniors in their 60's and 70's. Many of them are illiterate, but they have persisted in the twice weekly group Fa study and do the exercises every day. 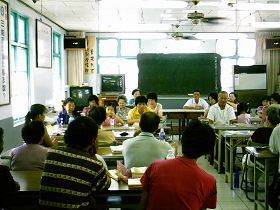 Making progress as one body

The following are from the practitioners' experiences sharing:

A practitioner talked about his understanding of what Master said about attachments to political parties. He said that before he practiced Dafa, he was concerned about political figure's words and actions. Since he practiced Falun Dafa, he pays less and less attention to politics. So at first he thought he had no problem with such an attachment. But the reality is not as he thought. When the media reported a lot of articles about one political leader, after watching TV day after day, he gradually began to care about the issues. When other people were discussing it, he would add a few remarks too. Without noticing it, his human notions were growing. Now, he realizes that this is not a proper state for a practitioner.

Practitioner B shared his experience with doing the three things: studying the Fa, sending forth righteous thoughts and clarifying the truth. He said that if one's mind is full of Dafa, this person is a true practitioner. Only the Fa can lift one's xinxing level. After you study the Fa well, you can send forth strong righteous thoughts, and clarify the truth effectively. The three things are related to each other.

Practitioner D shared her experiences with clarifying truth to "Wives from Mainland" (women from the Mainland China married to Taiwanese husbands). She became their friends, expressed her care for them, and then clarified the truth of the persecution to them when opportunities arose. The effect was very good. After learning the truth, those "Wives from Mainland" will phone their families in Mainland China and tell them that Falun Gong has spread to the world. It is not like what the Communist Party's TV said. They asked them not to be deceived by the CCP.

Through their Fa-study and sharing, practitioners looked inward to find their shortcomings and realize the importance of Fa-study. They understood that practitioners must maintain a high standard for themselves, share and study with each other and progress together.