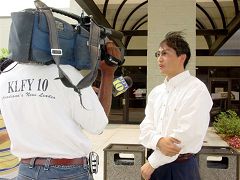 Falun Gong practitioner Edward told the TV station: I hope that Lafeyette civilians will learn about the ongoing severe crimes in China as this is also related to interest of many Americans."

The TV report concluded with a giant poster hoisted by practitioners. Text in the poster read: "Shout to stop the organ harvesting." The poster has a photo of Dr. Wenyi Wang's appeal at the White House. In addition, the poster also had photos of two witnesses of Sujiatun concentration camp: Annie and Peter, and a photo of practitioner Wang Bin who was persecuted to death by the regime. The broadcast concluded: Members of the team want to help the victims who are facing arbitrary organ harvesting.