From May 18 to 21, 2006, Taiwan Association for Rescuing Persecuted Falun Gong Practitioners held a four-day series of activities in front of the Department of Culture in Douliou City, Yunlin County. Activities included a press conference titled, "Protect Basic Human Rights; Stop the CCP's Harvesting Organs from Living Falun Gong Practitioners," a candlelight vigil, an art exhibit, and more. Councilor Liu Jian-Kuo and the chief of Department of Culture, Liu Chuan-Chi came to the activities to show their support. Viewing the displays and the "Truthfulness, Compassion, Forbearance Art Exhibition," many citizens in Yunlin County learned the truth about the persecution and signed their names to support the anti-persecution activities.

Typhoon "Chanchu" (Pearl) attacked Yunlin on May 18, when the press conference was held. Despite it, Councilor Liu Jian-Kuo still came to the conference. He said that he will propose a resolution with other councilors to remind citizens in Yunlin not to accept illegal organ transplants in China. The chief of Department of Culture, Liu Chuan-Chi, also supported Falun Gong practitioners. He generously lent the space in the department building to practitioners. He also opened the exhibition hall for the "Truthfulness, Compassion, Forbearance Art Exhibition" to avoid damage from the typhoon. 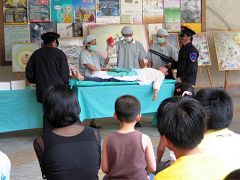 On May 20 and 21, practitioners re-enacted the CCP's organ harvesting from live Falun Gong practitioners. To make the display look more real, practitioners made a model crematorium. Many audience members cried, and condemned the CCP for being so cruel. Some mothers signed the names to support practitioners and asked their children to sign. A citizen from Dounan City was very interested in learning Falun Gong, and asked where he can find an exercise site.

In the evening of May 20, more than 100 practitioners held a candlelight vigil in front of Department of Culture in Douliou City. The "Tianyin Chorus" performed. The principal of Kouhu High School, Wu Yan-men recited poems to mourn for practitioners who died in the persecution. The councilor candidate from the 3rd district of Douliou City, Lin Pei-jun came to the candlelight vigil. Before the end, practitioners showed video "The Journey of Falun Dafa." Practitioners hope that people will be aware of the persecution in China and stand together to stop the CCP's harvesting organs.