Korea: Member of Parliament Calls for Investigation of Organ Harvesting in China (Photo) 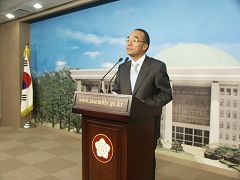 On the morning of May 16, Korean parliament member Park Jae Wan spoke to the media regarding organ harvesting in China.

On the morning of May 16, a press conference was held in the Korean Parliament regarding the recently exposed atrocities of harvesting organs from living Falun Gong practitioners. Reporters from a number of media outlets attended the conference, and parliament member Park Jae Wan gave a speech regarding the atrocities. He said: "We must immediately start to investigate organ harvesting in Chinese labor camps and organ trafficking in Korea."

He also called upon the Korean Government to raise the organ harvesting issue to the UN Human Rights Commission.

Park said: "The international community should investigate the Chinese Communist regime's atrocities of harvesting organs from living Falun Gong practitioners detained in labor camps and concentration camps. To clarify the confusion fabricated by the regime, international organizations and media should investigate all of the 36 concentration camps pinpointed by oversea media. In the meantime, they should also investigate Chinese organ transplant teams.

He said: "In March 2006, media in the United States, United Kingdom and France reported that the Chinese Communist regime removed livers and kidneys from detainees without anesthesia and then cremated the remains. On March 31, AFP, one of the five largest media, reported that an underground concentration camp in Sujiatun had detained more than 6000 people and 75% of them had had their organs removed and were then killed and cremated."

Park mentioned that he had contacted the Epoch Times, which first exposed the organ harvesting. He talked with Peter (also known as Jinzhou), one of the two witnesses who revealed the Sujiatun atrocities, by phone. He said that Peter was threatened by the Chinese Communist regime after he later exposed the crimes in Sujiatun, and that his testimony was very shocking.

In his testimony, Peter said that, "Going to China for organ transplants is equivalent to helping the Chinese Communist regime in killing. Such deeds violate morality and are very dangerous." He hopes that Korea patients can judge the situation wisely.

In the end, Park said: "During World War II, the international community and media didn't pay enough attention to testimonies of Jewish survivors of Nazi concentration camps. Consequently, several million Jews lost their lives and we should remember this lesson for good." Concluding his speech, Park made an emotional plea to the media and international community to pay close attention to this important issue.