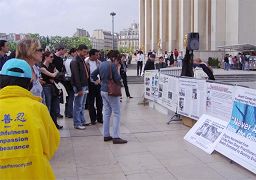 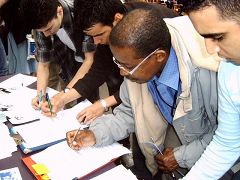 On May 6 and 7, 2006, French Falun Gong practitioners disclosed the crimes of the Chinese Communist Party (CCP) to passers-by by using a loud speaker, exhibition boards with pictures, collecting petition signatures and distributing leaflets at the underground Station of Odeon in the 6th Borough of Paris and on Human Rights Plaza of the Iron Tower in Paris.

Many French people strongly condemned the crimes of the CCP, calling on all kind people the world over to work together to end the killings. Many French people signed the petition to be sent to the President of France, urging the Government to make an urgent effort to rescue Falun Gong practitioners who are now suffering from the persecution in the CCP labour camps, prisons and concentration camps and calling for the Chinese regime to open all their labour camps to international investigation.

French people felt indignant after hearing about the evil doings happening right now in the labour camps and concentration camps in China and on seeing the torture picture exhibition boards. French people from all walks of life expressed their voices of justice in different ways, such as signing the petition and taking the petition forms and leaflets to their friends. A famous writer in France who specialises in writing about the problems of China also said that he would contact Falun Gong practitioners after signing the petition. Bruno Villecourt, a French councillor, left his business card hoping Falun Gong practitioners would send it to the President, together with the petition he signed.

On seeing the pictures, a lady expressed that it was too cruel for her to accept. She said: "I really don't understand why the Chinese Government persecutes these practitioners. They just believe in Buddha without doing anything wrong. I can't accept the fact that good people are being persecuted."

A gentleman said "It was a few months ago that I heard about Falun Gong ... To begin with, it is a very good practice but the regime of China has started the persecution and destroyed everything. Facing the persecution, the President of France keeps silent about it instead. You should continue telling the truth to the President and media in order to mobilise more people to end the crimes of removing organs from these innocent people!"

After looking at the exhibition boards with pictures disclosing the CCP persecuting Falun Gong practitioners in labour camps and concentration camps, a French man felt that the persecution happening now in China is so terrifying that he kept saying: "It is too frightening for me to go to China." He said: "This July, I am going to China to marry my fiancée, you know. Now I am afraid of going to China. Why has such a thing happened!"

An artist was standing for a long time in front of the exhibition boards and enquired about the truth from Falun Gong practitioners. He said: "This persecution has shocked us but I don't feel that it is odd that it is happening in China. I think that Falun Gong practitioners are being tortured just because of their faith. As communism is an autarchy, it doesn't allow other people to have different thoughts, the dictatorship thinks itself to be God; whatever anybody does, he or she should do according to its will. People in countries under the control of the Communist Party are not allowed to have their own thinking. People have no freedom of speech and there is no intercommunion between them."

He continued: "As to the action of removing organs from live people for sale, we should let the international communities of the U.S.A, Europe, Asia and Africa intervene and investigate it. Of course, such an investigation is very difficult because China is very strict with its inspection and control. Although I have never been to China, when I was young I knew from reports in the media that China is a country without freedom. Freedom is just what people would cherish and are yearning for. Freedom of speech can be prohibited but people's thoughts can never be controlled even if their bodies are being killed and burned. Their spirit will go on perpetuating!"

Judie is a student. She said: "We have no patience with the fact that a Government is persecuting its own people in such a way as removing organs from them. We should take actions to stop such a thing happening."

After signing the petition, Mr. Dechanbre said: "I am shocked at such a thing. I am not quite sure what is happening right now in China. I think what you are doing here today is so necessary that people should know the truth."

An Austrian student who studies in France signed the petition protesting against the CCP atrocities. He said: "It is so horrible that such a thing is happening in China. We must protest against it and do something to end such a terrifying thing."