(Clearwisdom.net) On Mother's Day--May 14, 2006, Falun Gong practitioners collected signatures at Causeway Bay--the busiest area in Hong Kong, urging the CCP to unconditionally release the mothers in Mainland China, who were arrested because of practicing Falun Gong. Many Hong Kong celebrities, including Situ Hua and Zeng Jiancheng, came to the event. 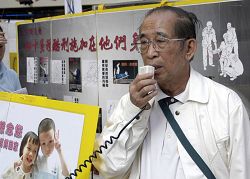 Situ Hua, president of the Hong Kong Alliance in Support of Patriotic and Democratic Movement in China, calls for support.

The CCP's Persecution of Mothers Who Practice Falun Gong

In Mainland China, many mothers are jailed in prisons or labor camps, just because they practice Falun Gong. What they are facing are brainwashing, torture, rape, and other atrocities, including harvesting organs. Mothers don't have the right to talk to their families. Today, we cannot even call them and say "Happy Mother's Day." Several mothers from Hong Kong, who are also Falun Gong practitioners, Xiao Wenhong, Liang Zhen, Kuang Senqia, came to the activity, calling for support. They also told citizens the mothers' stories of cultivation and being persecuted by the CCP. Many citizens signed their names.

Liang Zhen, a Falun Gong practitioner, said that her mother has been in prison for almost one year. She is not allowed to talk to her mother. On the morning of Mother's Day, she called Nanmusi Women's Labor Camp in Zizhong, Sichuan province again, where her mother is jailed, hoping that she could greet her mother on Mother's Day. The labor camp police said that since Liang Zhen practices Falun Gong she cannot talk to her. This is the illegal rule that the CCP made for all the prisons and labor camps.

Liang Zhen played the recording of the conversation between her and the labor camp guard.

Liang: "Today is Mother's Day. All the mothers in the world receive the greeting from their children. I hope that you can allow me to talk to my mother. You can listen to our conversation."

Labor camp guard: "You practice Falun Gong, so we cannot allow you to talk to your mother."

Labor camp guard: "This is the policy for all the prisons and labor camps that jail Falun Gong practitioners. You have a brother, who also practices Falun Gong, and you cannot go to visit him either. As to your mother, if she renounces the practice then she can go to visit your brother, otherwise, she cannot either."

Many Celebrities, Including Mr. Szeto Wah Came to Support.

On the same day, the democratic movement organizations from Hong Kong held an activity, calling for support of the "Tiananmen Mothers." Many politicians, including member of Legislative Council Mr. Cheung Chiu-hung, and member of east district Mr. Tsang Kin Sing, also came to sign their names to support Falun Gong practitioners and urge the CCP to release Falun Gong practitioner mothers.

Many citizens learned the truth about the persecution and signed to support Falun Gong practitioners. Causeway Bay is a shopping area that tourists from Mainland China often visit. There were a lot of tourists from Mainland China that day. They listened to practitioners and accepted materials. Some of them learned the truth and wanted to sign their names too. Although they had a little fear of being targeted for persecution by the CCP, they signed their names finally for the sake of justice.

Practitioners collected many signatures. Six pages of forms were filled. It seems that many citizens were waiting for a chance to sign. As soon as practitioners got out the signature forms, they came to ask what was going on. Many citizens signed their names without hesitating.

A girl cried after she learned about the CCP's persecution of Falun Gong mothers in prisons, and the CCP's harvesting organs from live Falun Gong practitioners. Her friend said: "The CCP dares to do any evil things."

Zhang Lihong is a mother of two children. She is the wife of Kuang Senqia, a citizen from Hong Kong. She was illegally sentenced to three years of forced labor and is jailed in Sanshui Women's Labor Camp in Guangdong.

Yuan Yuju is 64 years old. She is the mother of Liang Zhen, a citizen from Hong Kong. She was illegally sentenced to one year in a labor camp and is jailed in Nanmusi Women's Labor Camp in Ziyang, Sichuan.

Yue Changzhi is 69 years old. She is the mother of Xiao Wenhua, a citizen from Hong Kong. She was illegally sentenced to four years and is jailed in Beijing Women's Prison.

Liang Hua is the sister of Liang Yan, a citizen from Hong Kong. She was sentenced to 12 years. She is jailed in Chuanxi Women's Prison in Chengdu, Sichuan.

Hua Guoxiang is the cousin of Dong Ming, a citizen from Hong Kong. She was sentenced to two years in a labor camp. She is jailed in Moganshan Women's Labor Camp in Deqing, Zhejiang.