(Clearwisdom.net) Pontianak is located in the west of Kalimantan Island, Indonesia, only an hour's flight from Jakarta. Pontianak is not especially big but it is more special than any other city in Indonesia, because there are many Chinese people, especially in the downtown area. In December 12, 2005, two practitioners from Pontianak participated in the Falun Dafa Cultivation Experience Sharing Conference and parade held on Batam Island. Through studying the Fa and sharing experiences, they were very regretful that they hadn't taken part in a Fa conference before. They realized that they must follow the process of Fa-rectification and do the three things Master requires of practitioners. They planned to hold an introduction class and re-establish a practice site in Pontianak. 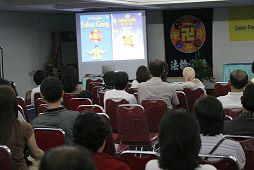 Local practitioners advertised the introductory class on the media for three days and distributed flyers to invite citizens in Pontianak to attend the Falun Gong Introductory Class to be held on April 28, 2006. Four practitioners from Jakarta headed for Pontianak on April 28 to offer their help. In June 2001, Indonesian Falun Gong practitioners had once held an introduction class there, and more than a hundred people attended. But during the following five years, because they did not pay attention to studying the Fa, they did not have a deep understanding of Dafa. They originally had a practice and Fa-study site, but later, when the owner of the site sold the room, the practice activities were almost disbanded. The remaining practitioners seldom got together.

Chinese people in Pontianak have been affected by all kinds of lies spread by the CCP media and the Chinese Embassy in Indonesia. They have even had their minds poisoned by the CCP's deceptions. Two days prior to the Introductory Class, the CCP embassy interfered. The hotel where the class was to be held canceled the rental contract, claiming that the practitioners had not applied for a permit. Practitioners spent two days going to several government organizations to clarify the truth. They went to the city police department to apply for a permit, and finally the police consented to help by issuing a permit to the practitioners. Though time was tight, local practitioners believed that with Master's strengthening, no interference would be able to hinder them. Eventually the police kept their promise and sent the permit to the hotel at 6:00 p.m., one day ahead of the class.

There were more than 50 people in attendance. The chief speaker introduced Falun Gong to the audience, and also explained about Ms. Wang Wenyi's protest incident at the White House and exposed the CCP's atrocities of harvesting organs from living Falun Gong practitioners. The audience listened attentively. Practitioners who hadn't appeared in the public for a long time also came to help demonstrate the exercises.

The next day, Sunday, nearly 40 new practitioners took part in group practice. Many practitioners also came to teach the exercises. The police officer that helped issue the permit also unexpectedly came to learn the exercises. After this introductory class, the local practice site regained its vigor. Group Fa-study has also started up again. Now, practitioners study the Fa together every evening from Monday to Friday.

After the end of the exercises that Sunday, a practitioner received a short message from the chief of the police department. It says, "This morning, when the God opened the window of Heaven and asked me what expectation I had, I answered, 'I wish that God will forever protect and care for the people who receive this message. ...' " Practitioners replied to his short message, "The window of Heaven has opened, Truthfulness-Compassion-Forbearance is the path to return."