(Clearwisdom.net) Westdeutsche Allgemeine Zeitung, one of the three major newspapers in the Ruhr Area, reported on Falun Gong practitioners' anti-torture exhibitions and other events protesting the Chinese Communist regime's human rights violations, which have been held in Dortmund since March 25, 2006. 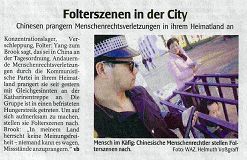 The anti-torture exhibition and the 72-hour hunger strike not only drew the media's attention, but also drew the attention of passers-by. People greeted the protesters and some asked, "Are you hungry?" The protesters replied, "Sure." "Then why don't you eat?" "Because in China, my friends are in a lot worse situation than I am; they need our help."

Some people who have learned the truth said, "I'm from a city nearby, would you please give me some handouts? I can pass them out for you."

Falun Gong practitioners also spent time in the surrounding areas to distribute truth-clarification literature, in cities such as Essen, DÃ¼sseldorf, and other places.