(Clearwisdom.net) On Thursday March 24, 2006, after learning about the recently uncovered facts of the Sutiantun concentration camp, Falun Gong practitioners from the Slovak Republic mounted a protest about these atrocities and news of this protest was sent to all major media in Slovakia. 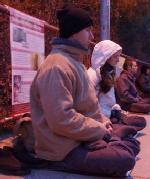 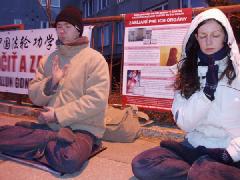 The protest was filmed by TA3 TV, which covers the whole of Slovakia and can be received also abroad via satellite. The camera man assured us that our banner about Sutiantun and organ removing was filmed as a close up shot, especially. He knew us already from previous protests, shook hands with us and wished us good luck.

Through this, more people in Slovakia will get the chance to learn about the atrocities in Sutiantun, so that this horrible crime will be stopped and the culprits will be brought to justice.