(Clearwisdom.net) Ms. Wang Wenyi who drew attention from the world's media during the welcoming ceremony at the White House one week ago, held a press conference on April 26, 2006 in the Marriott Hotel, Arlington, Virginia, in which she talked about the experiences that led to her actions on the South lawn of the White House. Two witnesses, Annie and Peter, who exposed the atrocities of harvesting organs from living Falun Gong practitioners in the CCP's Sujiatun Concentration Camp, also attended. 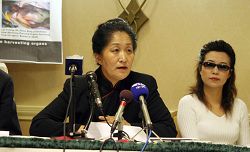 Wang Wenyi speaks, to the right is witness Annie 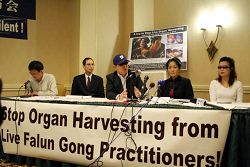 Saving People is the Prime Duty

Ms. Wang Wenyi said that her actions must be seen against the background that many Falun Gong practitioners may be killed at any moment and have their organs removed while they are still alive.

On March 8, 2006, the atrocity of harvesting organs from living Falun Gong practitioners at Sujiatun was exposed to the public. Many Falun Gong practitioners were pushed onto the operating tables while being administered very little anesthetic. Their corneas, kidneys and livers were removed and sold to international transplantation centers for profit. Ms. Wang said, "This is the darkest page of the persecution that has lasted nearly seven years, and it was not exposed until now. Actually, during the persecution in the past years, tens of thousands of Falun Gong practitioners have inexplicably disappeared. Some have been missing for several years, and their families also have no idea where they are. Cases of liver and kidney transplants in the past few years in China have been soaring, actually, gives a relevant answer to this question [the inexplicable disappearance of practitioners]."

Wang Wenyi said the World Organization to Investigate the Persecution of Falun Gong (WOIPFG) discovered that organ harvesting from living Falun Gong practitioners has taken place extensively throughout China. On March 27, the first "Interim on Human Organ Transplant Regulations" was issued, and hospitals all informed their patients to receive organ transplants prior to July 1. This indicates that they are hastening to destroy the evidence and kill witnesses.

Ms. Wang earned her PhD in Pharmacology from the University in Chicago and currently is chief editor of Medical Life, a journal published in North America. She said that as a doctor, she took treating illnesses and saving people as her prime duty. In face of such an urgent situation, she once wrote many letters to appeal, and has visited many governmental and non-governmental organizations and the media, but the international community and the media have seemed uncaring and unconcerned.

Ms. Wang said, "Last Thursday, when I was facing two leaders who are able to stop the atrocity, I thought when could I again have such an opportunity to face them. As a doctor, I once swore to take saving people as my prime duty, so under such circumstances, I chose that day at the White House, I called out to the current Chinese leader, Hu Jintao. Though the chief culprit for persecuting Falun Gong is his former leader Jiang Zemin, and the ones who have gone all out to carry out the persecution are Jiang's followers, Luo Gan, Zhou Yongkang, Liu Jing and Zeng Qinghong, Hu Jintao is after all current Chinese leader, I called out to him to immediately stop the atrocities happening in China. I believe the time for him to choose to do so is very urgent and limited. I hope that he can try his best to stop the atrocities, not only for his own good, but for all Chinese people."

The first witness who came out to expose the tragedy of harvesting organs from living Falun Gong practitioners, Peter, said at the press conference that he learned about the Sujiatun tragedy when he investigated the SARS Epidemic in China. As a journalist, he had hoped to expose such things, but it is impossible in China. For five whole weeks, Ms. Wang Wenyi and he went to almost all media outlets in the US, to the US Congress and House of Representatives, in hopes of exposing the matter through his efforts. But unfortunately, governments and congressmen in the US did not offer a sufficient response, neither have the media paid enough attention. After the revelation of Sujiatun Concentration Camp, the CCP rapidly destroyed all evidence there and relocated Falun Gong practitioners detained there. Three weeks later, the US State Department sent people to Sujiatun to investigate, under permission and guidance by the CCP, and of course no evidence could be found.

Peter said, "Actually, it's not just Sujiatun. In many places throughout China there are such facilities where such Nazi-like atrocities are being carried out. The Sujiatun case is only the tip of the iceberg. A large number of such phenomena have occurred throughout China. I hope the media present make full use of this report on the rally, and pay attention to this matter. We came to America to expose this matter risking our lives. This is a very serious topic. Actually, many doctors and staff members have learned the truth, and I hope they can stand out to help us provide these evidence."

Another witness of the Sujiatun atrocities, Ms. Annie, recounted to the media some detailed information she obtained from her ex-husband about the organ harvesting from living Falun Gong practitioners.

Ms. Annie said that after her ex-husband participated in removing corneas from live Falun Gong practitioners, his conscience was greatly tormented. In the end, his hand that held the scalpel trembled. When he decided to wash his hands of the job, he was pursued in China. Ms. Annie said she was stabbed in the lower back when she blocked one assassination attempt, which left a scar. Some doctors who participated in live organ harvesting successively disappeared or died. Her ex-husband has been in great pain, and wants to speak out but is very frightened.

Annie said, "In China, even if someone believes it they dare not report on it. Actually many people in hospitals want to disclose this truth, but they do not have the chance. Many hospitals are doing this, because the CCP ordered that beating Falun Gong practitioners to death means nothing, and is counted as suicide. Many local officials wante to make a profit out of this. It is very cruel. I call on insiders to step forward to speak out, one should be one's own master, not be the slave of money!"

Choose between conscience and profit

Spokesperson for Falun Gong Zhang Erping spoke on behalf of the Falun Dafa Information Center at the press conference. He said, "Ms. Rosa Parks, Martin Luther King and Mahatma Gandhi are all praised highly. We cannot discuss their actions without considering the background of why they did what they did. Wang Wenyi's action is out of her own conscience, and should also be respected. Chinese Falun Gong practitioners have been imprisoned, tortured, and even had their organs harvested for profit for not renouncing their belief. Think about it, if your children, or your mother had their organs removed on the operation table, would you remain silent? Wang Wenyi, such a petite looking woman, the mother of two children, used her own action to cry out to stop the killing. She should be respected like Ms. Rosa Parks."

Mr. Zhang Erping called upon the United Nations and the American government to conduct a deep and independent investigation into the atrocities of live organ harvesting and the persecution of Falun Gong in forced labor camps throughout China. He also called for dismissing the charges against Ms. Wang Wenyi. He said, "They should sincerely ask their conscience: what crime has Ms .Wang truly committed?"

Zhang Erping also said, the CCP's atrocities against Falun Gong, is not only the matter targeting one or two persons, but a crime against humanity. History will not forgive those who pretend to be deaf and dumb.

Some media asked Ms. Wang Wenyi, "Do you regret your action? If such a thing happened again, would you choose the same way?"

Ms. Wang answered, "At the time, I only put saving people as priority, so I took that action. I believe human nature is above all. I hope live organ harvesting can be exposed through the media, and there should no longer be such atrocities happening. Even if it happened, there would be some normal channels to expose it."

Mr. Zhang Erping added, it may be impossible to discuss clearly if Ms. Wang Wenyi should cry out to stop the killing out of a doctor's prime duty, or should she obey the conventions of a reporter. But one point is certain: when such atrocities as harvesting organs from living Falun Gong practitioners were happening every day, the media remained silent, and the leaders shook hands and enjoyed entertainment, ardently discussing trade for large sums of money. Only when a woman like Wang Wenyi stepped forward on that occasion to cry out was attention drawn, and yet even now the discussion is still focused on if her shouting was legal or not. This is truly a shame of humanity.

Mr. Chen Jun, the interpreter at the press conference also expressed his opinion. He said that the media has continued to ask Ms. Wang Wenyi if there were another chance next time, would she do the same thing. Actually before asking this question, all of us should first ask two other questions: One, we should ask the CCP if it still continues the persecution of Falun Gong; the other is to ask all the media and western governments, regarding atrocities like live organ harvesting, if we still intend to turn a blind eye to it and remain apathetic.

Over a dozen Chinese and Western media attended the press conference.