Changhua, Taiwan: Calling for an Investigation of the CCP's Live Organ Removal and Trade (Photos)

"If you keep silent before this massacre, what will you say when the truth is fully revealed?" This is from the speech of Mr. Hou Nian-chu from the Taiwan Association for Rescuing Falun Gong Practitioners.

Since the exposure of the CCP's atrocities of live organ removal in Sujiatun Concentration Camp, it has transferred imprisoned practitioners and conducted large scale killings to destroy eyewitnesses. People from nine countries and regions in the Asia-Pacific region conducted 24-hour hunger strikes to call on every government, organization and media to initiate an investigation of the persecution of Falun Gong practitioners in all labor camps, prisons and locations imprisoning practitioners in China. 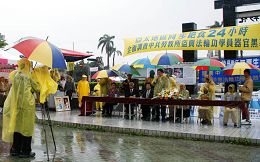 The event was initiated by practitioners from Hong Kong, Malaysia, Taiwan, Singapore, Japan, Indonesia, Korea, Thailand, and Macao. In Taiwan, it was hosted by the Taiwan Falun Dafa Association and the Association for Rescuing Persecuted Falun Gong Practitioners. On April 15 and 16, 2006, a press conference was held in front of the Changhua Train Station. A 24-hour hunger strike and candlelight vigil were held on the square in front of the Changhua County Government. A march was held on March 16.

The participants of the press conference included Jiang Chao-yi, member of the Legislative Committee, Ms. Chong, director of the Service Center for Quitting the CCP, director of the Global Coalition of Quitting the CCP and Economics Professor Chen Yu-cheng, dozens of hunger strikers and Falun Gong practitioners. The atmosphere was solemn and sorrowful. 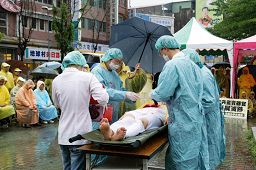 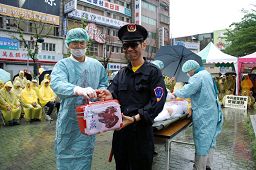 Mr. Hou Nian-chu said, "After the exposure of the CCP's live organ removal from Falun Gong practitioners imprisoned in concentration camps, some people could not believe it. Actually, under the CCP's blockage of information, a witness disclosed the live organ removal specifically. A veteran military doctor also provided similar testimony."

Ms. Chong from Tunghai University condemned the CCP's persecution of Falun Gong and pointed out that the CCP's labor camps imprisoned pregnant practitioners. Some of them were forced to have abortions or were tortured to death.

Doctor Chen explained the facts to people around him after he learned about the atrocities in Sujiatun. His friend is studying medicine in mainland China. After hearing about the facts, his friend said that he would never introduce patients to China to receive organ transplants. Doctor Chen sent proposals to all doctors associations in Taiwan he could reach and called on doctors not to go to China to conduct organ transplantation. The Taiwan Medical Ethics Committee of the Department of Health passed a resolution on April 12 that if any doctor participates in any form of organ transplantation in China, he is violating the code of ethics.

Mr. Jiang Shao-yi, member of the Legislative Committee, said that more people would be killed if CCP regime stayed in power longer. He saluted Falun Gong practitioners tortured to death by the CCP and expressed admiration for the humanitarian work of the practitioners.

Representative Gu Jin-nan of the Falun Gong Human Rights Working Group condemned the CCP's crimes from the point of law. Based on UN human rights covenants, the CCP's persecution is a form of genocide and constitutes severe human rights violations.

Qiu Tian-hsi from the Taiwan Falun Dafa Association called on the international community to investigate the organ trade in the CCP's labor camps. The investigation should be conducted by the 'Coalition to Investigate the Persecution of Falun Gong in China (CIPFG)' founded by the Falun Dafa Association and the Clearwisdom website. A joint team of the committee and related international organizations, state agencies and media should go to China to conduct an independent, direct, interference-free investigation to collect evidence, and comprehensively search for the facts of the persecution of Falun Gong.