On March 25, 2006, more than four thousand Falun Gong practitioners from around the world gathered in Manhattan and held a march to further expose the Chinese Communist Party (CCP)'s crimes at the Sujiatun Concentration Camp. In the camp, body organs are harvested from living practitioners and their remains are cremated to destroy evidence. The march also supported nine million withdrawals from the CCP. The large-scale activity had an impact Manhattan and with countless tourists and residents of the financial capital of the world. 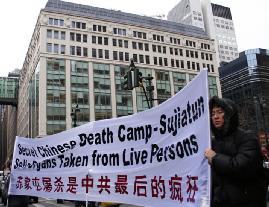 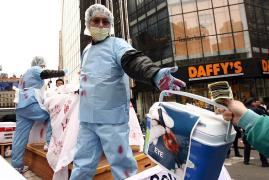 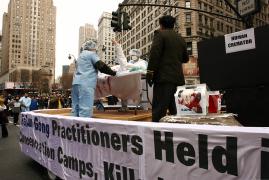 Bob, a student from Africa studying Computer Science, said that the march was very successful. It let people understand what Falun Gong and the persecution of Falun Gong by the CCP in China is about.

Bob said, "I was very impressed with the exposure of crimes in Sujiatun in harvesting and trading practitioners' body organs. It is horrible and the CCP is committing crimes! Anyone can see it is a crime! This must be stopped immediately."

Bob said that the American people should help Chinese people and each one should take actions for the future of Chinese people. Such crimes should not occur in China or any other locations in the world.

"I know why they are holding such a large-scale activity"

While eating lunch, Robert, a manager of a tour-guide company watched the whole march. He said, "I know why they hold a such large-scale activity--because the CCP persecutes and tortures them."

Robert said that his company is located near the Chinese Consulate in New York. There are practitioners meditating and protesting there often. He often reads the Epoch Times to obtain first-hand news about China.

"Waiting for Evidence" and Killing

A professor at a Christian university and a local Chinese resident said, "I see so many people in the march and information shown there is a death camp in China. Body organs are harvested from living people. I believe it is true because they behave righteously."

The professor pointed out that such a situation occurred in World War II. The German Nazis were killing Jews and western countries, including the USA did not pay attention to the matter. They delayed for 2 to 3 three years with the excuse of waiting for evidence. But during this period, 2.5 million more Jews were killed.

"Seeing Falun Gong practitioners' march, I thought that if 60 years ago so many righteous people had stood out to speak for the Jewish people, far fewer people would have been killed and at least the persecution could have been minimized. I think that these people stepping out today are admirable. They are determined and commit so much effort to seek justice and stop the crimes. If today we were to appease China or remain numb and wait for more evidence, a similar tragedy to that of 60 years ago would be reproduced."