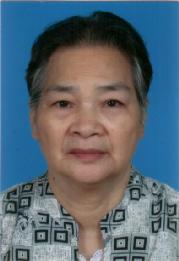 Upon the passing of the Lantern Festival, I could no longer restrain my repressed sadness and anxiety. My mother, a Falun Dafa practitioner, had passed away on February 9, 2006 due to the evil Chinese Communist Party's (CCP) persecution. Recalling my mother's life, many thoughts and feelings surfaced.

A Hard and Busy Life, and a Lucky Chance to Practice Dafa

My mother was enrolled in the Bachelor of Science in Medicine Program at the Zhongshan Medical Science University of Guangzhou in 1956. After she graduated during the catastrophic "Cultural Revolution," she was sent to the rural villages and worked at several institutions, including the Department of Pediatric Education and Research at Guangdong Zhanjiang Medical School, the Department of Internal Medicine at Foshan Area First People's Hospital, the Yueshan Commune Health Station at Kaiping, and the Chinese Medicine Hospital of Kaiping. In 1976, as the "Cultural Revolution" came to an end, my mother was reassigned to the city of Guangzhou and worked at the Yuexiu District Chinese Medicine Miscellaneous Illnesses Hospital. She was the deputy chief of the hospital when she retired.

Everywhere my mother worked in the past, especially in the rural areas with limited medical equipment and poor conditions, when there were emergencies, my mother was always the first person actively involved in the rescue of patients in critical condition (like those with leptospirosis, extreme typhus, etc.). She helped many patients recover from critical illnesses and trained many "barefoot doctors" (doctors working in rural villages, not part of the regular government establishment), who later became regular local doctors or factory doctors. She put forth a lot of effort and was awarded the "Pioneer Worker's Award" many times.

After returning to Guangzhou and working for a while, my mother retired in early 1994 to take care my old and very ill grandmother. My grandmother was unable to get out of bed, which led to serious bedsores; her wounds were so deep that her bones were visible. After five years of my mother's care, however, my grandmother's illness was cured, which was a miracle.

Many years of hard work caused my mother's heart condition (hyperthyroidism) to surface from time to time. At the end of 1995, quite by accident, my mother went to Guangzhou Yuexiu Park and began to practice Falun Gong (Falun Dafa).
Within a very short period of time she recovered from her illness. My mother had decades of medical experience and was educated in modern science, which strengthened her belief in Falun Gong, and she believed that Falun Dafa was a broad and profound science. For this reason, she established a new Falun Gong practice site at Guangzhou Sculpture Park in 1997 and volunteered as an instructor so that more people could get to know and begin practicing Falun Gong.

Steadfast in Her Belief and Repeatedly Subjected to Persecution, She Passed Away Unjustly

In 1999, Jiang Zemin and the CCP started the persecution against Falun Gong, so my mother went to Beijing to appeal in February of 2000, where she was illegally arrested and sent back to the Guangzhou Yuexiu District Detention Facility. She was confined there for 15 days.

On January 1, 2002 my mother and brother were arrested in Wuzhou, Guangxi Province because they refused to give up their belief and continued practicing Falun Gong. They were illegally sentenced to 7 and 8 years in prison, respectively. My mother was sent to Guangxi Nanning Women's Prison, and my brother was sent to Guangxi Guilin Prison. Before this happened, on December 3, 2001 my wife Zhu Luo Xin, (who was a coordinator at the Falun Gong assistant center at Guangzhou Liwan District), was illegally arrested for the same reason and sentenced to 10 years in prison. She was sent to the Guangdong Province Prison for Women, located in the suburbs of Guangzhou. I was also arrested on May 28, 2001 and sent to the Guangzhou Number 1 Prison Labor Camp for 2 years. Between January 25, 2002 and June 8, 2002 I was hung from the handcuffs on the parade grounds of the Fifth Production Brigade at the labor camp, and was forcibly exposed to the burning sun. My mother's younger sister, Wu Yuyun, also refused to give up her belief in Falun Gong and was persecuted to death in September of 2004.

In June of 2004, as a result of the awful conditions at the Guangxi Nanning Women's Prison and the persecution, my mother was diagnosed with late stage breast cancer. Only because of this diagnosis was she allowed to leave the prison for one year on medical parole. In April of 2005, as the one-year period was drawing to a close, officials from the Guangzhou Prison for Women visited my mother on three separate occasions, and tried to force her to renounce her belief in Falun Gong; they said if she didn't they wouldn't extend her medical parole, and she would be sent back to Guangzhou Prison. My mother wouldn't give in and had to flee from home. On July 11, 2005 at about 10 a.m., National Security personnel arrested my mother in Zhengzhou. They notified the officials of the Guangzhou Prison for Women, and someone was sent on the next flight to Zhengzhou to identify my mother. She was subjected to 48 hours of continuous interrogation, and on the third day (about 8 a.m. on July 13th), my mother suddenly started hemorrhaging. Those responsible used many towels to try to stop the bleeding, but they couldn't. They finally released my mother because they were so afraid of being liable for her life. All by herself, with great difficulty, my mother endured her pain and took a train back from Zhengzhou to Guangzhou. After she got home, she had a fever for more than 20 days, and her health continued to deteriorate rapidly. Officials from the Guangzhou Prison for Women and officers of the residents' committee drew up medical parole paperwork in a hurry and transferred her relationship filing. (Note: "Relationship filing" is a personal information document required by the CCP) Temporarily assigned to the community, she was compensated with only 300 Chinese yuan a month in order to cover up their crime of persecution.

By order of the officials of the 610 Office, my mother's workplace had not paid my mother's retirement benefits for many years. With little to pay for her living expenses and medical care, my mother lived in very difficult circumstances. She suffered great bodily pain every day and died unjustly.

On the day of my mother's death, at 2 o'clock in the afternoon, a family member had to go the local police station to process the death certificate. Since my mother's registration of residency was revoked illegally, officials at the Guangzhou Sanyuanli Police Station, the Guangzhou Huale Street Police Station, and the Department of Public Safety of Dongshan District each tried to push the responsibility back and forth on each other, and they all refused to process the certificate. It was midnight before the certificate was finally issued. It took nearly 10 hours and a lot of effort to get the certificate. A simple funeral was held during the next two days. The officials from the 610 Office wouldn't allow my mother's relatives to read their memorial speeches for her, so they had to quickly read their speeches outside the room instead. The funeral expenses also had to be paid by our family, and if we requested my mother's former employers to help pay, we'd have to wait for official approval.

During all these experiences, we've seen the cruelty of the persecution of Falun Gong, which was started by Jiang Zemin and the CCP. Even after my mother was persecuted to death, they still wouldn't quit, and continued to bring more pressure and cause more trouble. In addition, there are still countless families that are suffering the same kind of cruel persecution in China today. We appeal to all of the just and compassionate people of the world to pay attention to the persecution of Falun Gong in China. This persecution must end immediately.