Germany: Support from a Small Town in Bavaria (Photos)

On February 18, 2006, practitioners held a Falun Gong information day in Ansbach, a beautiful small town in Bavaria, Germany. Although it is a small town with a population of only a few thousand, local people came in streams to sign their names in support of Falun Gong. Many people stopped to learn about the violations of human rights in China. 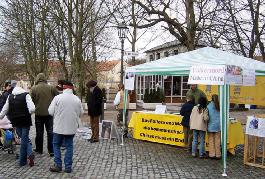 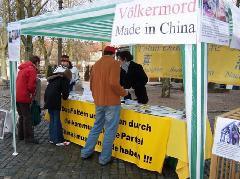 A senior citizen said after talking to a Falun Gong practitioner, "I understand it very well because I used to live in East Germany under communist rule." Later he signed his name to support the protest against the persecution of Falun Gong and wished practitioners success. A high school student signed the petition and also talked with a practitioner for a long time. He asked for a lot of leaflets and other material that he could distribute among his classmates. He also planned to do a report on Falun Gong at school.