At 3 p.m. on February 24, two reporters of the Nordland Daily, the largest newspaper in northern Norway-Nordland region, interviewed 11 Chinese practitioners who have been recently accepted by the Norwegian government as refugees. Eight of them came from Thailand last month and 3 came from Japan half of a year ago. After the Chinese Communist regime started to persecute Falun Gong, they were all subjected to brutal torture and huge mental pressure. 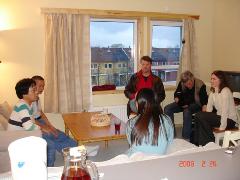 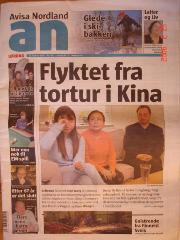 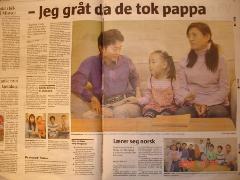 The article detailed many facts of the brutal persecution

At the place where the practitioners currently live, 11 practitioners from 4 families in turn recounted the mind and body benefits that Falun Gong has brought to them and the brutal persecution that they have experienced in China. The interviews went on for more than 3 hours.

Mr. Jianhui Li was once a millionaire before the persecution. Li and his wife Ying Dai were brutally tortured for their belief in Falun Gong. They recounted some of the torture that they were subjected to in jail. Because of extended electric shock at her temples, Ying's left eye became blind. Angela Wang cried as she remembered the time when her family could not go home due to repeated threats from the Chinese Communist regime. Miaomiao told the reporters her heartbreaking story: Her husband was unlawfully arrested when he was taking their then 3-year old daughter to daycare. Her daughter was left on the street with no guardian and was traumatized. Mr. Zhenqi Tan and Chunhua Zhang said that they could not go back China to visit their relatives who have been traumatized due to high pressure and repeated threats from the communist regime for the couple's faith in Falun Gong.

The reporters were shocked and could not understand why the Chinese Communist Party feared Falun Gong so much. The practitioners explained accordingly and gave them a set of Falun Gong truth-clarifying materials as well as the Nine Commentaries on the Communist Party.

On February 25, the Nordland Daily published a front-page article which continued on pages 4 and 5, detailing stories of the practitioners.