On November 26, 2006, practitioners from Ukraine held activities at Donetsk to protest the Chinese Communist Party's persecution of Falun Gong. They told the Ukrainians about the atrocious persecution taking place in China with the hope of awakening kind people to fight this calamity together and to improve the human rights conditions in China as soon as possible. 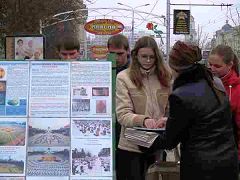 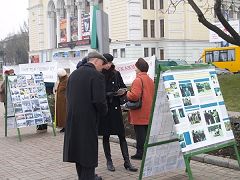 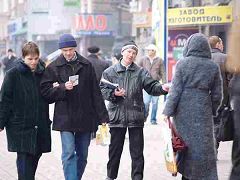 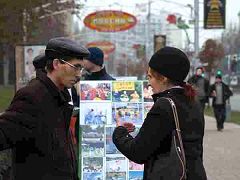 November 25 is Commemoration Day in Ukraine. It is a day to remember the hundreds and thousands of Ukrainians who lost their lives during the Great Famine in 1932-1933, so that no one would ever forget this terrible tragedy. As a matter of fact the Great Famine was caused by the Soviet Communist Party, whose goal was the genocide of the Ukrainians and which has its ramifications even to this day. Practitioners told the Ukrainians about the persecution happening in China against Falun Gong practitioners, the CCP's goal being the genocide of practitioners.

During the event, many passersby stopped to read the exhibits carefully. They listened to practitioners tell them the truth about the persecution. Having learned the shocking practice of the CCP's organ harvesting from living practitioners, most Ukrainians signed the petition asking for an international committee to conduct an investigation of China's concentration camps.

Passengers in drive-by buses did not get a chance to obtain truth-clarifying materials. They tried, however, to view the photos in the exhibits through the bus windows as much as possible. Many snapped photos of the exhibits. Some drivers even stopped to inquire and ask for truth clarification materials.

When he heard that a group of kind-hearted people who believe in "Truthfulness, Compassion, Forbearance" are being persecuted in China, an older gentleman said right away, "This is not surprising at all, because it is still a communist regime over there. As an artist, a member of the Ukraine Art Association, I suffered from the Communist Party's persecution myself. I absolutely support what you are doing!" After talking with practitioners for a long time and reading the facts on the exhibits carefully, he signed the petition opposing the persecution in China.

After hearing practitioners talk about the CCP's persecution of Falun Gong, some asked, "What does the persecution in China have to do with me?" Practitioners patiently explained the importance of this to everyone. After learning the truth, they were no longer cold and immediately signed to support Falun Gong.

One young girl went up to the practitioners and said, "God led me here. I am a follower of the Orthodox Eastern Church. You people seem very clean and bright to me. I wish you success from the bottom of my heart, and I hope the catastrophe in China is brought to an end as soon as possible."