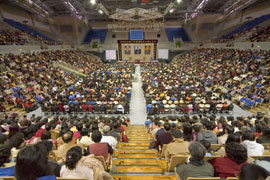 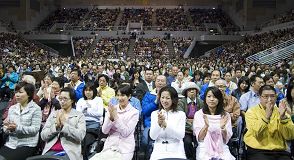 Mr. Wang Luoping is 83 years old. He had been smoking for 60 years and tried all kinds of methods to quit, but failed. After attending the Falun Dafa workshop, he quit smoking in seven days.

Mrs. Su Yingyi is a high school teacher from Taoyuan. After reading Master's new article "Thoroughly Dissolve the Evil," she realized that negating the evil by making phone calls to China is very urgent. She made dozens of phone calls to the labor camps in China. Since she had a solid wish and righteous thoughts, more and more people learned the truth. One policeman said to her, "We are conquered by you. OK, OK, we will release the practitioners here."

Mr. Chen Guoyan from Taichung shared that he has a short temper, and sometimes yells at others when doing the coordinating work. Due to his short temper, his family has doubts about Falun Dafa. Once he asked his wife why she doesn't cultivate Falun Dafa. His wife said, "The only reason I don't cultivate Falun Dafa is you." Mr. Chen was shocked and looked deeply inward. He decided to correct his behavior and become a real practitioner who strives forward diligently.

Dr. Hsiao Wushan, a college professor, shared his experience of clarifying the truth to government officials. Through his efforts, the Department of Health in Keelung released news announcements reminding citizens of the danger of organ transplants in mainland China.

Mr. Chen Sichi said that he had been in a military unit, where the environment was horrible and many solders picked on him. But no matter how others treated him, he obeyed the principles of "Truthfulness-Compassion-Forbearance" and tried to save others. Due to his righteous thoughts and actions, he rectified the environment. Now, he gets along with the other solders very well. When people are amazed that he can treat others as he does, his colleagues said that it is because he cultivates Falun Dafa. 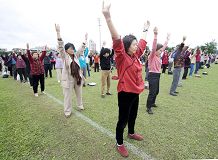 Doing the exercises during the break

During the lunch break, practitioners did the exercises. Some everyday people also learned them.

24-year-old Cullum McConnell is from Canada. He has been cultivating for five years and is teaching English in Taipei. He said that the experience sharing gave him great encouragement to strive forward diligently.

36-year-old Yang Jun is from Saipan Island. He started cultivating in 2002. He said, "Practitioners from different workplaces and classes can cultivate based on the teachings of Dafa. I am very touched by the practitioners' sharing."

16-year-old Irene Limanto is from Indonesia. She has been cultivating for nine years. She said that she learned a lot of from other practitioners.

At the end of the conference, practitioners encouraged each other to strive forward diligently and save sentient beings with righteous thoughts and actions.