Practitioners hold banners to explain the facts in the cold weather 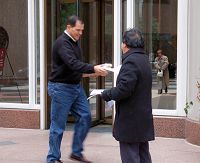 Practitioners distribute flyers to people entering and exiting the building

The Boston Branch of the Singapore Economic Development Board is located in Boston's financial center. Many people entering and exiting the building could see the practitioners' banners worded "Singapore, I am crying for you", "Singapore court: infringe human rights, unlawfully imprisons Falun Gong practitioners", "Singapore court: forgets justice in the face of commercial interest and assists CCP to persecute kind people". Many people accepted flyers and came to know the facts. One person who works in the building, said that he was surprised that Singapore imprisons people without good reason. A democratic country should not allow such things to occur.