November 30, 2006 |   By a practitioner from New Zealand and photographers Li Rui and Yi Luoxun

(Clearwisdom.net) On November 25, 2006, dozens of groups participated in the annual Christmas Parade in Howick, Auckland, New Zealand. The biggest group was the Divine Land Marching Band from New Zealand, which was formed only one month ago. 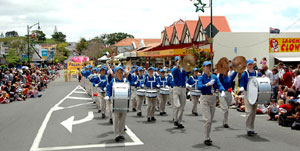 In the band, the youngest member is only 12 and the oldest is 70 years of age. It is amazing that they can perform so well after only one month of practice.