(Clearwisdom.net) On October 22, 2006, practitioners traveled to Gifu Prefecture, an area where there are no Falun Gong practitioners, to introduce Falun Gong. They demonstrated the exercises and held a press conference and a parade in a park. 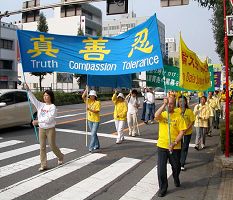 Practitioners did the group exercises in the park. Since it was a Sunday, many families saw them. The gentle music and movements attracted many tourists. Two Japanese ladies learned the exercises and took truth-clarifying materials.

Practitioners introduced the principles of Dafa to the public, and how it has spread to 80 countries around the world.

In the parade, practitioners held banners which read, "Falun Dafa is good"; "Truthfulness-Compassion-Forbearance"; "China (the CCP), Stop the Persecution against Falun Gong!" and "Falun Dafa Spreads in the World". Many people were attracted to the parade, and accepted the truth-clarifying materials.

One gentleman said: "I have read Falun Gong materials when I was in China. I really don’t understand why the CCP persecutes such a good exercise." Two other people said: "We know about Falun Gong, and understand practitioners. Keep it up." One gentleman followed the parade all the way to the end. He said: "Your T-shirts are really pretty, and you did a good job of playing the waist drum. Next time, please also bring the dancing ladies."