(Clearwisdom.net) On October 24, 2006, police from the National Security Team of the Jilin City Police Department in Jilin Province arrested practitioner Ms. Mu Ping from Huadian City in Jilin Province. Later that day, her home was ransacked and her belongings confiscated. The next day she was taken to the Jilin City Detention Center. She is currently in Room 608.

Mrs. Mu Ping's husband, Mr. Shao Hui, was a doctor at the Medical Clinic of the Hongshi Forest Farm of the Hongshi Forestry Bureau in Huadian City. Because he practiced Falun Gong and clarified the truth to people, he was monitored and arrested by police from the Jilin City Police Department. In August 2002, he was tortured to death. He was only 31 years old. To cover up their wrongdoing, the Jilin City police have kept any information about his death from his family. 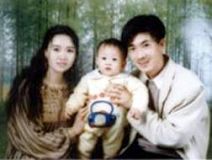 Even today, Mrs. Mu Ping and Mr. Shao Hui's ten-year-old son still do not know that Mr. Shao is dead. Whenever the boy sees someone that looks like his father, he says "He really looks like my dad." When asked what he wants to be when he grows up, he says that he wants to be a good policeman. He wants to stop bad policemen from arresting good people, so that his father and auntie, also a practitioner, sentenced to a 12-year prison term, can return home.

A Happy Family Broken Apart; Parents Wait for Their Son to Return Home

Ms. Mu Ping, Mr. Shao Hui, and their son were a very happy family. Both parents practiced Falun Gong. Their son was intelligent, handsome, and mature. Since Jiang Zemin began the inhuman persecution of Falun Gong, like millions of other practitioners, they were subjected to inhuman mistreatment and torture.

Ms. Mu and Mr. Shao went to Beijing to appeal for Falun Gong in September 1999. The police arrested and detained them after they returned home. At that time, Secretary Zhang Xuecai of the Hongshi Forestry Bureau Party Committee, Director Ma Xijin and Deputy Director Sun Zhiyi of the Huadian City Police Department, Section Chief Liu Mingyi and Deputy Chief Li Fuwen of the Political Security Section of the Police Department, Director Zhou Jing of a local police station attempted with many dirty tricks to force practitioners to give up their belief. They treated Mr. Shao and Ms. Mu as "special targets." The police restricted the husband's freedom, withheld his ID card, put them both under surveillance, and monitored their telephone conversations. Before sensitive dates, the police took them to the station for questioning. They told the couple to pay bail or security, but they refused, so the Forestry Bureau withheld the amount from Mr. Shao's salary. Mr. Shao and Ms. Mu's normal lives and work were frequently disrupted.

In April 2000, police from the Political Security Section of the Huadian City Police Department broke into and ransacked their home. They confiscated Falun Dafa books and a mini recorder. The police then detained them.

In November 2000, Hongshi Forestry Bureau planned to send the firm practitioners to forced labor camps. On November 21, Mr. Shao and Ms. Mu were arrested again. At the detention center, Mr. Shao was beaten and threatened by Deputy Director Wang Ruiqing. When an inmate sat in the lotus position, Wang Ruiqing thought that Mr. Shao had taught him the Falun Gong exercises. Mr. Shao was dragged out of the cell, brutally beaten, and tortured. Even the inmates in the cell thought this was unfair. Mr. Shao was also tortured when he was interrogated by guards Fang Weimin and Li Changyu from the Criminal Investigation Team and two guards. He was beaten, deprived of sleep, and forced to squat for about 20 hours.

In December 2000, both Mr. Shao and Ms. Mu were sentenced to three years of forced labor. Mr. Shao was taken to Huanxiling Forced Labor Camp in Jilin City. He was tortured and his freedom was restricted. He was forced to do hard physical labor and was beaten and verbally abused daily. He was ordered to give up his belief. To reach the target '"transformation" ratio,' the guards tortured practitioners with many different devices. Practitioners were beaten, shocked with electric batons, deprived of sleep, put on short food rations, and forced to sit on benches for a long time. One method was to force practitioners to sit on a two-inch-wide wooden strip. Some practitioners' buttocks were injured and full of pus from sitting too long. Mr. Shao was full of scabies and he had two long scars on his forehead from these tortures.

In February and March 2002, the guards began again to try to "transform" firm practitioners. Everyday the sizzling sound of the electric batons, the beating of sticks and whips, and the guards' shouting could be heard throughout the buildings. Practitioners were beaten brutally, and some became disabled. The guards talked to Mr. Shao many times and laid many torture instruments on the table to threaten him. At the end of February, one practitioner was beaten to death. Mr. Shao and other practitioners felt that they should not passively bear the torture any more. The persecution of practitioners should be stopped. Mr. Shao decided to escape the labor camp to frustrate the authorities.

On March 31, 2002, with strong righteous thoughts, Mr. Shao escaped from the forced labor camp when he went out to work. The labor camp officials were afraid and had the police search for him. Police from Jilin City searched at every practitioner's home who had known Mr. Shao Hui, but they did not find him. Mr. Shao Hui's successful escape greatly frustrated the evil, and also greatly encouraged other practitioners at the camp. Guards from the forced labor camp looked for him everywhere. Since they could not find him, they harassed his parents and relatives. They wanted to arrest his wife, Ms. Mu Ping, but her relatives stopped them. Then they asked Ms. Mu to report to a police station daily and provide information about her husband. She refused. At that time, Ms. Mu had just been released from a forced labor camp and was very weak as result of torture.

On the tenth day after Mr. Shao's escape, Ms. Mu was arrested by Zhang Xuecai, Zhang Qing, Zhou Jing, and others. She was taken to a forced labor camp. In June 2002, Mr. Shao Hui's elder sister, practitioner Mrs. Shao Zhen, was arrested by police from the Huadian City Police Department for making truth-clarification materials. She was sentenced to a 12-year prison term.

After escaping from the forced labor camp, Mr. Shao went into hiding. He still used many methods to clarify the truth to people.

In August 2002, police from the Jilin City Police Department followed Mr. Shao to the apartment he had rented at Building 2 in the Fengman District in Jilin City. A practitioner who stayed with Mr. Shao jumped out of the window on the seventh floor and was severely injured. Mr. Shao was arrested and tortured to death in the room. To cover up their crimes, the Jilin City police have not informed Ms. Mu Ping or other relatives of Mr. Shao Hui's death.

Mr. Shao's parents searched for their son for over two years. Worrying about him made them sick and they became bedridden. The overwhelming hardship made his father lose his eyesight. His mother had a spine fracture when she fell, and she developed high blood pressure. This elderly couple suffered exhaustion and illnesses and were sick with worry, but they still had to take care of their grandson, Mr. Shao Hui's son.

"Mom, I Am Afraid That You Will Be Arrested by the Bad People When You Are Out."

Mr. Shao and Ms. Mu 's son, Shao Linyao, is 10 now. Mr. Shao and Mrs. Mu became practitioners when little Linyao was only a month old. Little Linyao grew up in a harmonious family and a healthy environment. Not only was he intelligent and good-looking, but he was also very mature. Whoever met him liked him. 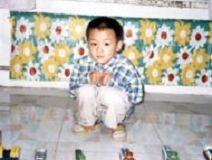 But Shao has experienced loneliness and fear and suffered separation from his parents since he was three. After his parents' arrest, he cried every day. When he cried, he did not make a sound, but just kept wiping away his tears. He also cried in bed and many times woke up in tears. Once he went with his grandmother, uncle, and aunt to visit his mother at the forced labor camp. He thought that trip was to bring his mommy home. But when they left, he did not find her in the car. He burst into tears, asking his grandmother why his mom did not come home with them. He cried during the four-hour trip home, until he lost his voice. At the day care, he sometimes cried suddenly. When the teacher asked him what was wrong, he said that that his parents were being tortured in forced labor camps and that the guards used electric batons to shock them.

When his mother was released on medical leave after being tortured for almost three years, Shao Linyao did not leave her side. He was afraid that he would lose his mother again. Whenever his mother went out in the evening, he would not go to sleep until she came back. His mother told him that he needed to go to sleep earlier so that he could get up for school the next day, but he said in tears, "I am afraid that you will be arrested by the bad people when you are out. I can't sleep if you are not home."

Around 11 a.m. on October 24, 2006, Ms. Mu was arrested by police from the National Security Team of the Jilin City Police Department when she went to pay her taxes at the Chaoyang District Tax Bureau in Changchun City in Jilin Province. They did not show any identification or documents when they arrested her. Later, police from the Jilin City National Security Team and Mengjiatun Police Station of Chaoyang District Police Department in Changchun City ransacked her home, confiscated her computer, cash, a bank deposit card holding seventy thousand yuan, Dafa books, and truth-clarification CDs.

Police from the National Security Team took Ms. Mu's bank card and went to Huadian City Construction Bank to freeze the seventy thousand yuan in her account. When her relatives went to the bank to withdraw the money, they were told that her account was frozen. Her mother, 76, was not able to bear all these sudden hardship and suffered a heart attack.

Ninth Section of the National Security Team of the Jilin City Police Department: 86-432-2409864