On November 21, Liu Qi, former mayor of Beijing and currently a member of the Chinese Communist Politburo and Beijing Party Secretary, started a 4-day business visit to Israel. Liu is directly responsible for the persecution of Falun Gong practitioners in the capital city. During the evening of November 23, Liu attended a party at the Chinese Ambassador's house in Herzliyya. While holding a peaceful protest outside the house, local Falun Gong practitioners were assaulted by an unidentified man who walked out of the Ambassador's house. 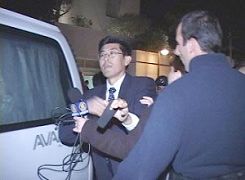 As soon as Liu Qi arrived in Israel, the local Falun Dafa Association filed a criminal complaint to the Tel Aviv Police Department, charging Liu with torture, crimes against humanity and genocide for his role in the persecution of Falun Gong.

On the evening of November 23, Liu and his delegation attended a party at the Chinese Ambassador's house in Herzliyya. Around 8:00 p.m., local practitioners gathered outside the house to conduct a peaceful protest. A man then walked out from the house to stop the protest. An Israeli reporter for NTDTV who was conducting an interview at the site was also physically assaulted by the man.

During the incident, a policeman present at the scene did not stop the assailant. Instead, he shoved the NTDTV reporter. The assault was not stopped until a senior police officer arrived. The peaceful protest then resumed.

The assaulted practitioners have filed a criminal complaint with the Herzliyya Police Department against the assailant.