(Clearwisdom.net) On November 11 and 12, 2006, an event was held in the activity center of Yamato, Kanagawa, Japan. Similar to last year, local Falun Gong practitioners participated in the event by setting up a booth and demonstrating the exercises. Unlike last year, more than 30 organizations were divided into 7 groups. Falun Gong practitioners were in the Health Promotion Group. To make the event successful, four organizations of the group met many times and made posters together. 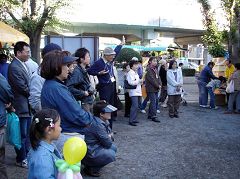 Children from the Kanagawa Minghui School performed with waist drums, dancing and exercise demonstration on stage. They prepared for the event carefully for nearly three months. To help the audience understand the grace of Falun Dafa from the performance, teachers guided the children to practice again and again after class every Sunday. The children’s performance won much applause. At the end, they asked the audience to come again next year.