Experience Sharing Conference Held in Hong Kong: Practitioners Focus on How They Study and Cultivate (Photos)

(Clearwisdom.net) The 2006 Hong Kong Falun Dafa Cultivation Experience Sharing Conference was held on November 11, 2006 in the auditorium of the Prince Caritas Service Center in Kowloon. Practitioners from the local area as well as from outside Hong Kong attended. The atmosphere of the conference site was solemn and peaceful. Eighteen practitioners from different places shared their cultivation experiences. 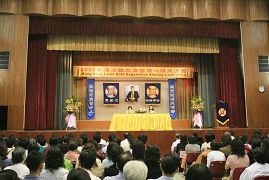 
Among the speakers was a veteran practitioner who was joined onstage by a new practitioner who just started practicing Falun Gong less than a year ago. Their experience sharing focused on how they do well the three things as Master has required during the Fa-rectification cultivation period, how to compare with each other in study and cultivation so as to make improvement together, how they have gone through tribulations on their paths of cultivation, how to look within for their shortcomings, and their experience and understanding in the process of validating Falun Dafa and rescuing sentient beings with righteous thoughts and actions.

In particular, some practitioners talked about how they diligently rescue sentient beings while spreading the Nine Commentaries and advising people to quit the CCP. Some shared their experience of clarifying the truth to visitors from mainland China at tourist spots. Some spoke about how they clarified the truth to high-level authorities and the media with righteous thoughts and actions.

Practitioners who are being wrongfully charged by the Singapore government shared how they have broken through human notions and overcome fear during the harsh tests. Practitioners involved in a deportation case shared how they sent forth righteous thoughts inside and outside the court, clarified the truth, and their experience of mighty power of Dafa manifested when practitioners cooperated and coordinated well as a whole.

Some talked about persistently distributing truth clarification newspaper to help more sentient beings be saved. Some mentioned clarifying the truth to the police and government officials with righteous thoughts, overcoming obstacles and manifesting the dignity of Dafa.

Some talked about the importance of studying the Fa and doing the exercises, and their experience of clarifying the truth to foreign consulates.

A practitioner who started practicing Falun Gong two years ago talked about how his whole family gradually took the path of cultivation with Master’s compassionate protection. A new practitioner who just started learning Falun Gong less than six months ago talked about how he obtained the Fa when he was on the verge of death, and how he experienced the miraculous phenomena in Dafa while eliminating illness karma.

Practitioners, veteran or new, had one understanding in common: that they must cherish the rare opportunity to obtain the Fa and advance diligently all the way to completion.

Prior to the beginning of the afternoon session, young practitioners went onstage and sang the song "Falun Dafa is Good," and also recited poems from Hong Yin, gaining applause from the whole audience.

On the morning of November 12, more than a thousand practitioners took part in group practice in Victoria Park and formed two Chinese characters meaning "Fa Rectification" in English. Many practitioners also attended a grand parade supporting 15 million brave people who have quit the CCP and its affiliated organizations. The parade was held by the Hong Kong Service Center for Quitting CCP and other groups. The theme of the parade was "The Nine Commentaries have widely spread; Quit the CCP publicly, and disintegrate the CCP."