(Clearwisdom.net) On November 11, 2006, Falun Gong practitioners from the Mid-USA area attended the activity, "Support 15 Million Withdrawals from the Chinese Communist Party and its Affiliated Organizations" organized by the Service Center for Quitting the Party in Chicago. Attendees assembled at the plaza in South Chinatown to support the withdrawals from the party and encourage more people to quit the party. The activity was honored as "The celebration you cannot see in China" by the New Century TV Station in Chicago. 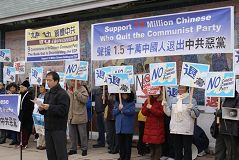 At the rally, a representative on behalf of Falun Gong practitioners read a "Solemn Statement" written by the Epoch Times, and some selections of statements from people quitting the Chinese Communist Party (CCP). Many Chinese listened to the statements and showed respect to practitioners. After the rally, attendees paraded through Chinatown. A loud speaker in the parade broadcast news about quitting the party to the Chinese people. Practitioners also passed out a lot of truth-clarifying materials.

A Chinese person asked a practitioner:

"What are you doing?"

"We are supporting the 15 million withdrawals from the party."

A practitioner said the purpose of holding the parade was to encourage Chinese people to say "No" to the evil Communist Party.

Practitioners believe that when more and more people know the truth, and help stop the persecution against Falun Gong, and when the evil nature of the CCP is exposed, a New China without the CCP will emerge.