On January 1, 2001, several Falun Gong practitioners from Singapore came to India to introduce Falun Dafa, and I began to practice then. From the very beginning of my cultivation, I can feel that Master has been guiding me. Due to Master's benevolent arrangement, Falun Dafa is spreading among students in Southern India very fast. 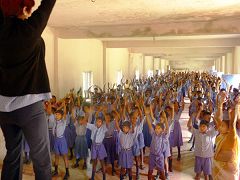 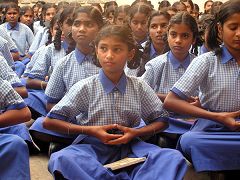 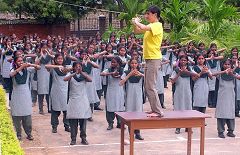 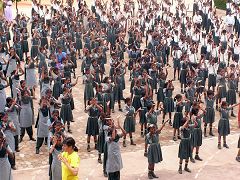 Teaching the exercises in schools 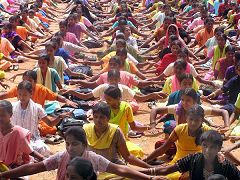 After talking to the principal of the public girl's school, he asked us to teach 1200 students the exercises. Although there were many people and it was very hot, students learned the exercises very seriously and peacefully. 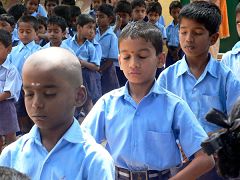 Before we--practitioners from Canada and Sri Lanka came to this school, some of the students had been practicing for two months. We asked them to share their experiences. The boy in the center of the photo said: "Falun Dafa makes me stronger. I don't know how to say it, but the change in me is huge."

The spreading of the Fa in schools in India started with a teacher's vacation in Singapore, where she saw some people doing the exercises. She asked for more information, and she got my contact information in India. All of these look like coincidences, but we know it was Master's arrangement.

She called me after she got back to India, and invited me to her school to teach the exercises. The students in her school learned the exercises and started doing the exercises regularly. The principal of the school thought that Dafa brought good fortune to the school. For example, they didn't have any computers before, but after the students started practicing, somebody donated 12 computers to them all of sudden. 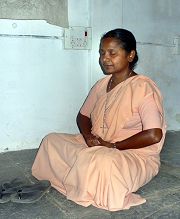 A nun said: "Buddha has come to the human world."

At the boarding school, I first taught 300 students in 10th grade. After one semester, some miracle happened: 100% of the students passed their exams. The passing rate previously was only about 50%. The principal believed that it was a miracle that Dafa brought to them, so he started practicing seriously too. Soon, the asthma that he had suffered from for 40 years disappeared. In the last four years, the students in this boarding school do the exercises for 30 minutes each morning and afternoon.

The principal of the boarding school invited me to introduce Falun Dafa at a workshop for teachers held at his school. The theme of the workshop was "How to achieve a better life via cultivating mind and physical body". Sixty teachers from different schools attended.

I talked to the organizer of the workshop, who is a teacher from a public school. He enlightened that Dafa is the truth of the universe, and obtained the Fa immediately. He changed the agenda of the workshop, because he realized that everything he planned to teach at the workshop is actually included in Dafa.

Three practitioners from Sri Lanka came to the workshop to help. It was hard for them, because they had to buy the airplane tickets. The organizer asked them if it was worth it to spend so much on the tickets just for a one-day long activity. The practitioners told him that the activity was much more valuable than the airplane tickets. This simple answer made a very deep impression so that people still talk about it even now. The organizer and other people learned the power of Dafa from this activity.

One year later, that organizer became a very diligent Dafa disciple. Due to his high social position and that of his school, he was able to quickly spread Dafa to most schools in his district. His whole family cultivates now, and they set up an exercise site for local practitioners.

We were short of manpower to handle more and more invitations to teach the exercises. Then Master made the arrangement--a practitioner who just graduated from college moved to our city to help us. Now, this practitioner regularly visits many schools to correct students' exercise movements and encourage them to study the Fa. We have visited a lot of schools, and wherever we went, we donated some Dafa books, music CDs to the library and some other materials.

Recently two practitioners from Sri Lanka and Canada came to my city to help. In four days, we visited 13 schools in 4 towns. Wherever we went, the power of the Fa opened people's hearts for us. The principals always arranged the exercise-teaching shortly after we talked to them. We know that it was Master's arrangement. All we need to do is to maintain righteous thoughts and walk well on the path arranged by Master. We all felt very happy sharing the principle of "Truthfulness-Compassion-Forbearance" with the students. From our point of view, the students are like lotus flowers, and have the chance to step onto a righteous journey.

I also had some tribulations, most of which were sickness karma. I often had extreme physical pain on the night before I needed to teach the exercises. It was often so painful that I felt that I could not go the next day. But, I always had solid righteous thoughts the next morning: "If you solidly believe in Master and the Fa, you can do everything." This righteous thought always eliminates the pain. I know clearly that Master is always with us.

There were many xinxing tests too. I used to be a teacher, so when I was teaching the exercises at schools, some of my human notions which were formed when I was a teacher came out again. For example, I had the attachments of showing off and validating myself. But I always remind myself that all the achievements I have had are actually due to Master, not me.

So far, we have introduced Dafa to eighteen thousand students in thirty five schools. When the principals and teachers learn Dafa in one school, they always pass the information around, so that the teachers in another school would invite us too. We have many invitations and got very busy, but every time we introduced Dafa to a new school, some people would obtain the Fa and become new practitioners to help us.

I know that all of this is Master's arrangement. I don't have to think too much. All I need to do is to walk well on the path that Master has arranged for me.