On October 17 to 19, 2006, under invitation from the Korean Human Rights Organization, former MP David Kilgour and international human rights attorney David Matas of Canada visited Korea and held a press conference. They introduced their report on the CCP's organ harvesting from living Falun Gong practitioners and drew a tremendous reaction. 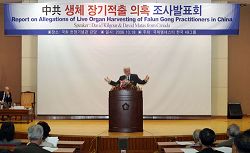 Mr. David Kilgour discusses the "Report into Allegations of Organ Harvesting of Falun Gong Practitioners in China" at the Korean National Assembly (Gukhoe) 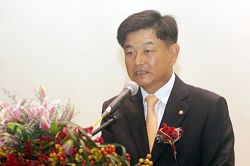 Member of the National Assembly, Shin Hok-yong of Uri, delivered a speech 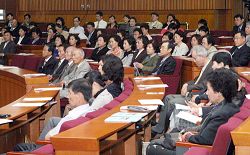 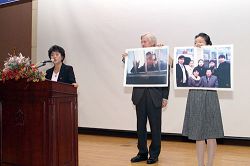 Ms. Quan Qingzi, mother of a Korean-Chinese practitioner Jin Xuezhe, who was sentenced to ten years of imprisonment, gives a speech 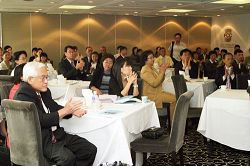 The conference started with the MP Shin Hok-yong of Uri's opening speech. He pointed out that the organ harvesting from living Falun Gong practitioners happening in China must be immediately stopped, and he hoped to help the Korean people understand the severity of the human rights violations in China. MP Shin said after hearing Mr. Kilgour and Mr. Matas' speeches: "This is a very good opportunity to understand the human rights violations that Falun Gong practitioners in China are suffering."

Three-term Peace Ambassador of the International United NGO and former MP Kim Huw-yee said: "People who defile corpses are punished. Organ harvesting from living people is a much worse crime, which angers the heavens and human beings alike." He promised to try his best to stop the CCP's atrocity.

Ms. Quan Qingzi, the mother of a Korean-Chinese practitioner Mr. Kim Shue-jue, who was sentenced to ten years of imprisonment only for his practicing Falun Gong, attended the conference and gave a speech. As Mr. Kim underwent a blood test in prison, Ms. Quan worried that he would face the danger of organ harvesting. She called on everyone to help rescue her son.

Practitioner Ms. Ko Sung-nyo, who was arrested in 2003 in China, was tortured and interrogated in forced labor camp. She was later rescued to Korea. She attended the conference and gave an account of her personal suffering to the audience.

The Canadian human rights activists visited the Chair of the Legal and Legislation Committee of the Korean National Assembly MP An Xyong-xue after the conference, and they urged him to pay close attention to the organ transplant issue in China. MP An indicated that he would do so and ask the Health and Welfare Ministry to investigate cases of people going to China for organ transplants. Based on the results, he would ask the Legal Affairs Ministry to proceed with an official investigation. If there is sufficient evidence, he would promote the legislation on this issue.

In the same afternoon, a press conference was held at the International Press Club, which many reporters attended. Mr. Kilgour and Mr. Matas expressed their concerns about the issue of people going to China to receive organ transplants. They called for legislation on the issue and re-iterated their findings. All of the major Korean mainstream media were present at the event.

On the morning of the 19th, Mr. Matas and Mr. Kilgour visited the Chair of the Human Rights Forum in the parliament and the General Secretary of the Grand National Party MP Hyung Ywo-loo. They wanted to remind him about the organ harvesting from living people happening in China. MP Hyung stated that all the MP's in the Human Rights Forum will actively participate in the investigation and asked for ten more copies of the report.

Former cabinet member MP Lee Yeong-ji ran into Mr. Kilgour and his group on the way to the International Affairs meeting. Even though it was a chance meeting, MP Lee led them to the meeting room in a library nearby and had an extensive conversation with them. After listening to the introduction by Mr. Kilgour, MP Lee said that he visited the art exhibition on the persecution of Falun Gong practitioners last year in Parliament, but he didn't expect that the organ stealing situation to be so severe. He promised to do everything he could to stop the human rights violations and expressed his respect for their efforts.

After a brief talk with MP Loo Hyong-lyi and Hyu Gya-yuen, Mr. Kilgour and Mr. Matas went to the National Organ Transplant Center, where they exchanged ideas with four officials on the long term issues of illegal organ transplants in China and Koreans going to China to receive organ transplants. The Korean officials expressed their deep concerns on the organ harvesting issue in China, promised to notify the Korean people once they verified the facts, and expressed a desire to find out more from future investigations.

Mr. Kilgour's group also met with the chair of the National Human Rights Committee Mr. Kuok Loo-hyun and exchanged views on the issue of organ harvesting from living people. Chairman Kuok listened to their introduction attentively and said that he's met with the practitioners in their organ harvesting re-enactment on the street and signed the petition calling for an end of the persecution. He said that the photos had a big impact on him. He said that he would continue to pay attention to this issue and he would post relevant documents on the website of the National Human Rights Committee.