On October 4, 2006, Sydney was in radiant and charming spring with brilliant sunshine. Hundreds of people from all circles and representatives from different groups in Sydney held a large parade and rally in downtown Sydney, celebrating the 14 million Chinese people quitting the Chinese Communist Party (CCP) and its affiliated organizations. They also supported Yuan Sheng and Gao Zhisheng. The grand parade procession set off from the city square, passing through Chinatown and ended in Belmore Park in Central Railway Station. They held a rally in the Belmore Park, which included speeches and singing and dancing performances to support the grand withdrawals from the CCP and its affiliated organizations. 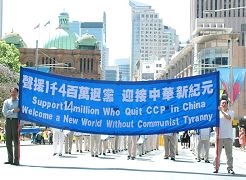 The parade procession was divided into several lineups. Majestic Divine Land Marching Band took the lead, next was the lineup for the wide spread of the Nine Commentaries and the Three Withdrawals. The eye-catching huge book of the Nine Commentaries vividly expressed the grand trend of the three withdrawals inspired by the Nine Commentaries. The third line up was exposing the tribulations that people have suffered under the CCP’s tyranny. On a big truck was the reenactment of the CCP’s harvesting of organs from living Falun Gong practitioners for profit. The reenactment exposed this extremely horrific atrocity. Accompanying the anti-torture exhibit was an introduction in both Chinese and English. The last lineup was the waist drum group. The group brought a jubilant atmosphere to the celebration, and conveyed a message that after the end of the CCP’s tyranny, Chinese people will obtain a new lease on life.

With the police’s protection and a police car clearing the way, the grand parade procession marched gracefully, attracting and shocking countless people in Sydney. Particularly the reenactment of the CCP’s harvesting organs from living Falun Gong practitioners for profit shocked the hearts of anyone who saw it. Many people took pictures to record such special historical scenes. Chinese tourists, in particular, had their photos taken with the parade process in the background.

After the parade, people came to the Belmore Park in downtown Sydney to hold a rally to give speeches and watch singing and dancing performances to celebrate the 14 million people quitting the CCP and its affiliated organizations. Speakers included representatives from the Sydney Service Center for Quitting the CCP, Free China and other groups. Several Chinese people also gave speeches. They talked about how they have thoroughly got rid of the shackles of the CCP culture from the bottom of their hearts, awakened their morality and conscience and have become upright and noble free people. They exposed the CCP’s crimes committed against the Chinese people, and supported the Chinese people abandoning the CCP regime by means of quitting the CCP and its affiliated organizations, such a method that is peaceful and full of moral strength.

Former PhD tutor at the Chinese Academy of Science Mr. Li Gaoqing made a speech exposing how the CCP’s Party culture has poisoned and eroded Chinese people’s hearts and consciences. The education circle is a heavily hit area. As an intellectual, he has personally experienced that many Chinese intellectuals have given up their pursuit for the truth and safeguarding morality and conscience under the brainwashing of the CCP’s Party culture and its tyrannical rule. Instead, they turned to pursue titles of technical posts and promotions, and even sing praises of the CCP in order to defend its rule. They have become tools of the CCP in its political rule. Mr. Li Baoqing expressed that the Nine Commentaries on the Communist Party and Disintegration of Party Culture (a series of articles published by the Epoch Times) have truly inspired him and many Chinese people to start awakening, and realize the poisoning nature of the CCP’s Party Culture. Mr. Li also expressed that only by seeing clearly the CCP’s Party culture brainwashing and therefore resigning from the CCP and its affiliated organizations, can we find a true path to restore traditional Chinese culture and Chinese intellectuals’ benevolent traditions.

Falun Gong practitioner Mr. Luo Minqiang revealed with his personal experience that his father had unfortunately passed away several days ago. He urgently applied for a visa to return to China for his father’s funeral, but the Chinese Consulate coerced him to guarantee to no longer practice Falun Gong or taking part in Falun Gong activities. After Mr. Luo refused to go against his conscience, the Chinese Consulate rejected his visa application. Mr. Luo expressed that showing filial piety for one’s parents is normal human feeling, and also the virtue of the Chinese nation, however, the CCP completely has no regard for overseas Chinese dutiful feeling, and attempted to make use of this normal human act to coerce him to go against his conscience. The CCP is really destroying traditional Chinese thought, morals and ethics.

Representative from the Service Center for Quitting the CCP, Ms. Zhang Licheng, expressed that quitting the CCP has become a general trend and people’s hope. The number of withdrawals was increased from 11 million to 12 million in over two months, and it took over one month when the number was increased from 12 million to 13 million, while it took less than one month to increase from 13 million to 14 million. This has fully explained that more and more Chinese people have had awakened their conscience, and chose their own future. Now, more and more Chinese people requested help in quiting the CCP. Due to the CCP’s tight blockade, many requests for quitting the CCP were unable to be received outside of China.

Attendees condemned the CCP’s tyranny, particularly, the recently exposed crime of the CCP's harvesting of organs from living Falun Gong practitioners for profit. They also congratulated the Chinese people for awakening after reading the Nine Commentaries on the Communist Party, and having announced their resignations from the CCP and its affiliated organizations.

The sponsor of the activity that day informed passersby of the CCP’s crimes and the ongoing grand trend of quitting the CCP by means of displaying banners, photo boards, distributing truth clarification materials and live broadcasts. The truth clarification photo exhibit exposing the CCP’s organ harvesting from living Falun Gong practitioners, in particular, attracted many passersby to surround and watch and learn about the truth. Many passersby signed the petition to condemn the CCP’s inhumane act, and request to conduct an independent investigation on the CCP’s atrocities.

The audience at the rally also watched the wonderful performances of the Divine Land Marching Band and dancing troupe to celebrate the over 14 million Chinese people breaking away from the control of the CCP.