"Murder for Profit - Made in China": Speech by Brian McAdam on Parliament Hill (Photo)

On September 26, 2006, Falun Gong supporters and several Members of Parliament held a rally in front of Parliament Hill, calling upon the Canadian government and people to take action to stop the Chinese Communist Party's harvesting organs from living Falun Gong practitioners. Brian McAdam, a well-known Canadian diplomat, gave a speech at the rally. The following is a transcript of his speech. 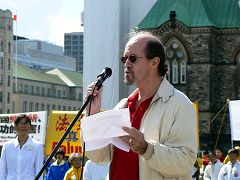 China's Communist regime has dazzled the world with its dramatic economic growth in the past decade.

However, among the many dark secrets it has hidden, is that for decades China has prospered from harvesting organs from executed prisoners and selling the body parts for transplantation.

The U.S. Congress held hearings on the matter, which caused a sensation. But the sensation died down, as sensations tend to do. Organ-harvesting has gone on, with no negative consequences for the Chinese government."

Because China dangled billions of dollars of trade, seducing many countries into ignoring human rights issues in China, it was allowed to join the World Trade Organization (WTO) and was selected to hold the 2008 Olympic Games, which respects universal moral values.

China broke its silence in December 2005 and admitted for the first time that the majority of the organs for transplants came from executed prisoners.

Now the world has learned from a report by former Canadian Member of Parliament, David Kilgour, and human rights lawyer, David Matas, that "there has been and continues today to be large scale organ seizures from unwilling Falun Gong practitioners."

"The widespread killing of Falun Gong practitioners for profit to provide organs for transplants is 'so shocking that it represents a new form of evil in the world,' said Mr. Matas."

This depravity is like something depicted in a science fiction or horror film and is reminiscent of the Nazi death camps.

This report gives the world a glimpse of the true face of the evil Communist regime in China.

Of course as usual China denied such depravities were happening.

Given the Communists' propensity to murder, deny and deceive, there should not be any doubt about the veracity of what has been revealed so far.

China uses denial and deception as part of their foreign policy, as it knows there are rarely any consequences.

There are so many people who think of China only as a good place to do business and make money, but they don't want to recognize those people running China who are involved in monstrous crimes that no civilized person would associate with. Now we ignore so many bad things that they have done, the Chinese Communists expect us to ignore this as well. That doesn't mean the rest of our country has forgotten these values.

I believe that when a country doesn't stand for certain moral principles and closes its eyes to oppression, in the end that decision comes back to hurt the country who closes its eyes and chooses not to recognize evil. In that case, China again, the Chinese Communist country is demonstrating evil that deserves condemnation by the entire civilized world.

The civilized world must join in the condemnation of forced organ donation in China and call for an urgent open and independent investigation.

And the world should follow the 17 recommendations made by David Matas and David Kilgour in their report.