Clarifying the Truth to People at the Funeral of Practitioner Ms. Zhao Fenglian (Photos)

Many people attended the service, including her relatives and friends. Her family members were afraid of getting in trouble, so they did not mention that Ms. Zhao was tortured to death in the jail. The funeral service was solemn and sorrowful. Two lines on a garland given by her fellow practitioners particularly impressed people. One of them read, "Related for thousands of years, connected by a predestined relationship, standing proud, who knows my wish; Hearing the Tao in the morning, one can die in the evening, attaining Falun Dafa, a great honor." The other one was, "Falun Gong practitioners, dry your tears, righteous thoughts sweep the universe; Practice Falun Gong, uplift moral quality, mercifully save people." 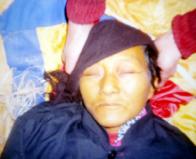 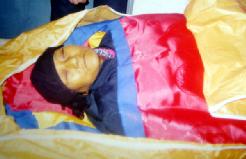 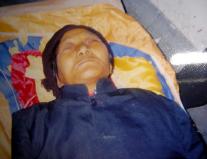 Ms. Zhao Fenglian was killed by the staff of the Women's Jail of Lanzhou City

About 9 a.m., right before Ms. Zhao's funeral procession started to move to a funeral parlor, big banners were hung on the sides of two cars in the procession. The banners read: "Zhao Fenglian was tortured to death by the Women's Jail of Lanshou City" and "Bring the guards who tortured Zhao Fenglian to death to justice." People on the street stared at the banners in astonishment and understanding. Some of them even read the words on the banners out loud. When the funeral procession started to move, the lead car did not take the route which was less crowded and had been assigned to the funeral service by the Jinchang City government. It used the main roads of the city! In addition, the funeral procession was stopped by every traffic light. When the whole procession stopped, many people stared at us and learned the truth. 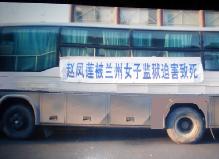 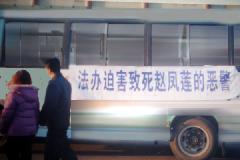 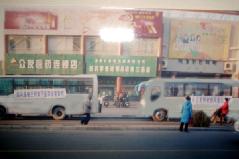 Cars in the funeral procession

When the procession arrived at the funeral parlor, Ms. Zhao Fenglian's family members, relatives, and friends all received flyers about how she was tortured to death by guards in the Women's Jail of Lanzhou City. The recipients showed their gratitude to the Falun Gong practitioners who provided the information.