After watching the video "Rescue the Falun Gong Orphans," many youngsters in a summer camp in Huddersfield couldn't help crying. Deeply moved, the principal said: "I cry every time I see the video. I am going to copy your petition and give it to every pupil and his or her parents, and ask them to help rescue these innocent children together." 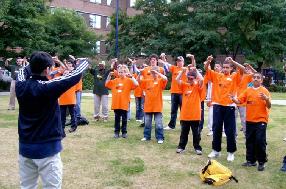 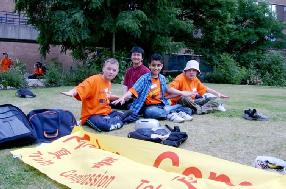 A teacher, moved by the video, came over and said to us, "I have never heard about all this before and I am going to read your leaflets carefully."

The children greeted us with respect, including those who seemed distant at first. Many children came to the grassy area where we were demonstrating the Falun Gong exercises and learned the exercises from us. They expressed their indignation towards the Chinese Communist Party's (CCP's) persecution.

Upon seeing their faces, I couldn't help but think of the children in China, who have been deprived of their right to know the facts about Falun Gong and are deceived by lies told in public by the CCP-controlled media propaganda. That's why they are hostile to Falun Gong almost automatically.

In the meantime, those poor children whose parents are being persecuted in China are under great pressure from society and their schools. I can give many examples: a well-known, young artist has been forced to do hard labor for three years, leaving his unemployed wife and his son behind, depending on each other and on their depleted savings; a principal of a foreign enterprise, with a Master's degree, was previously detained illegally for over three years and has now been unlawfully sentenced to more than ten years; his wife has also been forced to do hard labor for two years, and their child is living with his grandfather and paralyzed grandmother on a small pension.

Another practitioner who teaches psychology has been illegally sentenced to more than ten years. His child just started school not long ago. Still another engineer with a Master's degree was illegally sentenced to over ten years and forced to leave his newborn baby. However, none of these stories are allowed to be known by the people in China. The media, supervised and controlled by the CCP, are only allowed to broadcast the propaganda of hatred towards Falun Gong.

I am fortunate enough to be here in the UK studying, after two years of forced hard labor in China. Since then, I have been freely practicing Falun Gong in this democratic country; but it has been three years since my five-year-old daughter has seen her father. In the past three years, I don't know how many times she and her mom have cried together.

Whose children aren't loved by their parents? But in China, Falun Gong practitioners' children are forced to go through so much under the inhuman and cruel persecution; countless families are forced to break up and so many kind and good people are being illegally detained and cruelly tortured. What has been exposed and verified is just the tip of the iceberg. More than 2,700 Falun Gong practitioners have been persecuted to death and more than two hundred and fifty children have become orphans.

For over six years, the wicked Chinese Communist Party has been using the entire state apparatus to spread propaganda and hatred to brainwash the whole country. Although its crimes have become more and more concealed and things seem to be "quiet" on the surface, as soon as the party's viciousness is exposed to the world, the CCP will surely be cast aside by all people with a sense of justice and kindness.