The following is a description of the torture I, a Dafa Practitioner from Liaoning Province, suffered in the Huludao Labor Camp.

1. Standing on the Stomach and Jumping

In December 2000, the Huludao Labor Camp in Liaoning Province violently brainwashed and persecuted Dafa practitioners in order to force us to "reform". Seven or eight policemen shocked all the parts of my body with 6 or 7 electric batons at the same time and asked me if I still insisted on practicing Falun Gong. After I said I would still practice, they continued to shock me. After the batteries in the electric batons were exhausted, the policemen recharged them and continued to shock me. The police continued from 1 p.m. until 12 midnight. During the time they were charging the electric batons, the policemen surrounded me and vehemently kicked and beat me. Some of them even stood on my stomach, jumping up and down. They seemed to be enjoying themselves. (Picture 1) Five other Dafa practitioners who were tortured along with me were Chen Dewen, who was later tortured to death, Zhao Lianxin, Zhang Xuan, Li Xuemin and He Fenghua. 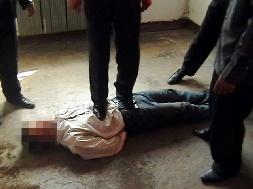 2. Cutting the Lower Back

Once, three Dafa practitioners were physically punished at the same time. One of them was forced to squat and another of them to kneel on a wooden board with sharp edges. The edges of the wooden board were so firmly pressed against practitioner's bones that they left a deep mark on his legs. The police instigated a number of inmates to forcefully cut my lumbar vertebra with a sharp edged wooden board. (Picture 2) I felt as if my lower back was severed. The pain was so unbearable that I fainted. After that, for over one month I suffered such unbearable pain that I couldn't move my lower back and I couldn't walk. 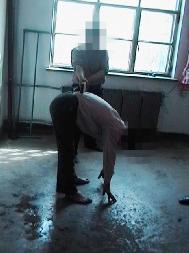 3. Slapping Practitioners in the Face with the Soles of Shoes

The police beat my whole head so severely with the sole of a shoe that my head swelled up as if it was a big ball. (Picture 3) After I was continuously beaten and shocked with electric batons this way for four days, we six Dafa practitioners were confined in a room and handcuffed together. We looked normal before the torture and were familiar with one another, but after being tortured and locked up in this room, our faces changed so much we couldn't recognize each other. We could only recognize one another by means of our voices. Our heads, eyes, mouths and ears were swollen. The swelling turned our eyes and mouths into narrow openings and our ears became much bigger. Our faces were bruised and oozed blood. After a long time, the blood congealed into blocks. The police laughed at us, "Only now do you look like Buddha." The policemen participating in the persecution against us were Liu Guohua, Wang Shengli and others. 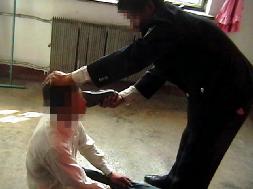 The police instigated one of the inmates to insert a key to an iron gate between two of my fingers. He forcefully turned it with one hand while he firmly seized my fingers with the other hand not permitting them to move. The muscles between the fingers were torn, mangling my hand. (Picture 4)
Then an inmate did the same thing with the handle of a metal brush. (Picture 5)

During my hunger strike, the police instigated the inmates to force-feed me with human excrement. This caused me to vomit and not to eat for a long time. (Picture 6) In the Huludao Labor Camp, Chen Dewen, two other Dafa practitioners and I suffered from savage force-feeding at the same time. They handcuffed our arms and legs to the four corners of a bed and I couldn't move for 13 days. Every day during this time, they force-fed us with salt water and maize gruel through a tube they inserted into the nose. When we were force-fed on the 13th day, Chen Dewen died from choking because the concentrated salt water entered his lung. Until then, we were not freed from handcuffs. In May 2002, I was arrested and sentenced to forced labor because I put up a banner in Beijing. I was sent to the Beijing Labor Camp Dispatch Center. Because I refused to cooperate with the authorities' demands, the police and some inmates tied me to a bed with a several-meter-long rope for 9 days and nights. During this time, they savagely force-fed me. They forcibly held my mouth open by pinching my cheeks with their hands. Then they inserted a sharpened wood stick into my mouth to keep my teeth apart. When my teeth were pried apart, they poured corn gruel and concentrated salt water into my mouth. If I didn't swallow these things, they plunged the stick into my throat. (Picture 7)

6. I was also forced to stand facing a wall for long time. (Picture 8) 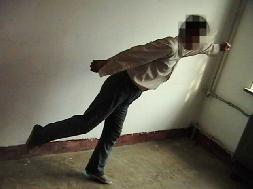