The Procurator General of the Chinese communist regime, head of the 610 Office, Jia Chunwang is being sued in Denmark for committing crimes of torture. The lawsuit brought broad attention from media. Major newspapers, radio stations and television media reported it in a timely manner. 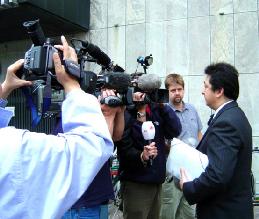 Media report on the lawsuit

Denmark State TV-channel DR also ran a report on this lawsuit. The following is the content of the report.

A lawsuit has been filed against China's Procurator General here in Denmark. Members of the Falun Gong movement accuse him of being responsible for torture and killings of the movement's practitioners.

Danish Falun Gong practitioners filed a lawsuit today against China's Procurator General who will be attending a conference in Denmark tomorrow.

He has been a driving force in the persecution of Falun Gong practitioners in China, and he can be judged according to the UN Convention Against Torture.

Chunwang is the former minister of public security, and according to Falun Gong therefore responsible for the murders, torture and persecution of Falun Gong practitioners in China.

It's a serious case. What we hope will come out of it, is that there be made a thorough investigation by the State Prosecutor, that Chunwang will be questioned, and that he be apprehended if that is necessary to keep him in the country while the case is to be investigated.

Practitioners of Falun Gong, which is a meditation movement, are according to many international organizations subject to torture in China. In Denmark, Falun Gong practitioners hope that Chunwang is apprehended tomorrow.

A man such as Jia Chunwang, who will be arriving Denmark, and who has so many lives on his conscience, should of course also be held responsible for his actions.