Marseilles, France: During the Sixth Anniversary of the Beginning of the Persecution, Practitioners Promote Falun Dafa and Expose the Brutality (Photos)

(Clearwisdom.net) On the 23rd and 24th of July 2005, the anniversary of the CCP having started the persecution of Falun Gong six years ago, practitioners displayed exhibition boards, introduced Falun Gong and disclosed the facts of the CCP having cruelly persecuted practitioners in China. The practitioners held this activity at the underground exit which goes to the busiest place in the city centre and the seaside in the old harbour in Marseilles. Marseilles is the second biggest city in France. Never ending streams of passers-by stopped one after another, asking for more information. 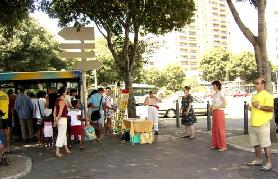 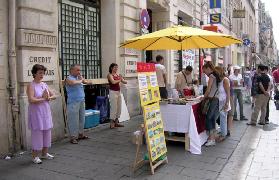 Practitioners introduce Falun Gong and expose the persecution in the busy down of Marseilles.

On one side of the exhibition desks were materials to expose the truth about Falun Gong and exhibition boards showing the beauty of the practice, which is promoted all over the world. On the other side were pictures showing different methods of torture that are used against Falun Gong practitioners in cruel attempts to force them to renounce their beliefs..

Many passers-by stopped, one after another and looked at the exhibition in order to learn the facts.

Constant stream of people who pass by stop to learn about the facts.

In the guestbook, a ten-year-old child wrote: "I thought that such cruel methods of torture had disappeared a long time ago, but I hadn't realised that I had made a mistake until I had seen these pictures today. But the mistake I had made is not my fault because nobody has told me before. I hope that you will continue doing this and telling the truth to everyone."

Although the child didn't write much, what he wrote greatly encouraged us. It is the purpose of our holding activities. What we have been doing is to let people all over the world know: "Falun Gong is a righteous way which teaches people to be kind and the persecution of Falun Gong is wrong."