(Clearwisdom.net) On July 30, 2005, several Minnesotan practitioners set up a booth at a local Farmer's Market in downtown Minneapolis. The event was a huge success. Many people learned about Falun Dafa, the persecution in China, and the righteous grace of Truthfulness - Benevolence - Forbearance. 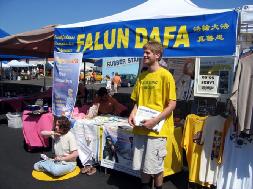 A practitioner hands out flyers while another demonstrates the fifth exercise

In the booth, we had several methods to clarify the truth to people. We had detailed information about orphans of Falun Dafa practitioners in China, as well as words and pictures depicting the persecution. We also displayed pictures of the five Falun Gong exercises with descriptions of each. On the top of the booth we had a huge blue and yellow banner which read, "Falun Dafa" and "Truthfulness Compassion Tolerance," in both English and Chinese. Behind the booth, we had a similar banner which faced a parking lot. The big blue banner caught a lot of people's attention.

Inside the both we had copies of The Falun Dafa Reader, local flyers, bookmarks, the book, Stories of Conscience, and also freshly-made paper lotus flowers to give to children and girls. Many people warmly accepted the flyers and the readers, and almost everyone accepted the bookmarks. Several practitioners demonstrated the exercises outside the booth, which attracted a lot of attention, and we saw a lot of kind faces and smiles. Many people attempted to mimic the exercises, and many people pressed their hands together in front of their chests in the heshi gesture. While practitioners demonstrated the exercises, another was handing out materials and clarifying the truth. 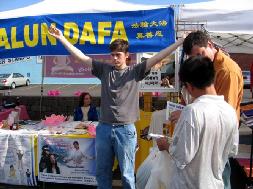 A practitioner demonstrating the third exercise and another clarifying the truth

Many people approached the table to ask questions. People ranged in age from old to young. Several of the older people had practiced qigong or yoga before and they were very interested in learning about Falun Gong. They all began to talk about their practices, but it always seemed that people were much more interested in Falun Gong, mainly because of the principles of Truthfulness, Compassion, and Forbearance. One older person asked us if the practitioner doing the sitting meditation was aware of us. We explained to them about the differences between a trance state and our Falun Dafa, where practitioners enter a calm and peaceful state but remain aware that they are meditating. They could see the calmness in us, and were delighted.

Two elderly ladies were asking about the exercises. One practitioner offered to demonstrate the fourth exercise, "The Falun Heavenly Circuit." During the demonstration, one of the women exclaimed, "I feel like I am in a pool! Just standing here I can feel the effects." The two ladies were very enthusiastic and took several copies of our informational materials. 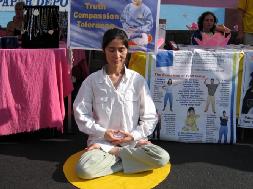 A practitioner demonstrating the fifth exercise

There were many predestined people at the Farmer's Market. One young man was so enthusiastic about the practice that he said loudly, "Falun Dafa is so great!" People from all ethnic groups were at the market, and all of them accepted Falun Dafa; all the people we talked to thought it was good and that the persecution was horrible.