(Clearwisdom.net) On July 21, several thousand Falun Gong practitioners from across the world held a solemn rally on Capitol Hill in Washington DC to protest the Chinese Communist regime's brutal persecution of Falun Gong. Six years have passed since Jiang's faction officially launched the suppression of Falun Gong on July 20, 1999. Practitioners call upon the world's people to help stop the CCP regime's inhuman violation of their basic human rights. 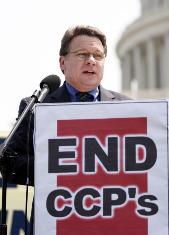 U.S. Congressman Chris Smith attended and addressed the rally. He stated in his speech that July 20th this year marked the sixth anniversary of China's brutal campaign to completely eradicate Falun Gong by whatever means necessary. The 2004 human rights report by the U.S. Department of State documented at length the plight of Falun Gong. Thousands tortured, thousands dead as a result of torture; tens of thousands jailed without trial, held in the laogai, mental hospitals and other areas in China and enforced to endure torture, brainwashing sessions. He said that the Falun Gong needs to be treated with respect and dignity and the dictatorship in Beijing has to cease its cruelty and do so immediately.

The following is the original text.

Thank you very, very much. It's great to see so many defenders of human rights especially in China where human rights are violated with impunity and with a very special obsession the Falun Gong has been singled out by the dictatorship in Beijing for absolutely cruel treatment, mistreatment through the use of torture and through the use of incarcerations without any justification whatsoever.

July 20th marked the sixth anniversary of China's brutal campaign to completely eradicate the Falun Gong by whatever means necessary. As you know Falun Gong practitioners had begun to outnumber communist party members and like all dictators in totalitarian terrorist systems, the PRC hates and fears what it cannot control, so it has decided to destroy those who practice Falun Gong. The State Department's human rights report as I think many of you know for 2004 documents at length the plight of the Falun Gong.

We see before us a Stalinist nightmare revived for the 21st century. Thousands tortured, thousands dead as a result of torture; tens of thousands jailed without trial, held in the laogai, mental hospitals and other areas in China and enforced to endure torture, brainwashing sessions. The report included and clearly indicated that Falun Gong adherents or other political prisoners sent to mental institutions have been administered psychiatric drugs and electric shock treatments by the Chinese authorities.

I'm also sorry to say, it is a sad but pathetic fact that the Chinese dictatorship as well has been trying to follow you into the United States and into other countries throughout the world to intimidate and to harass those who are peaceful followers of Falun Gong. The activities are similar to the infamous Nazi Bund in the 1930s where a hostile totalitarian police state tried to export its tactics to a free society and to manipulate, terrorize and mislead am immigrant community to do its bidding. I want to assure that you have friends in Congress, Republicans and Democrats who know and understand the brutal methods that are being employed against the Falun Gong in China and even outside the country.

As you know I will be chairing a hearing as chairman of the Global Human Rights National Operations in Africa Committee that will focus and bring new scrutiny, increased scrutiny and hopefully some more light to this ongoing abuse. You have friends here. We believe that you all, the Falun Gong needs to be treated with respect and dignity and the dictatorship in Beijing has to cease its cruelty and do so immediately. Thank you so very much